Use the dropdowns on our website to find out about special offers and programs, past events,

merchandise, book clubs, and many other things 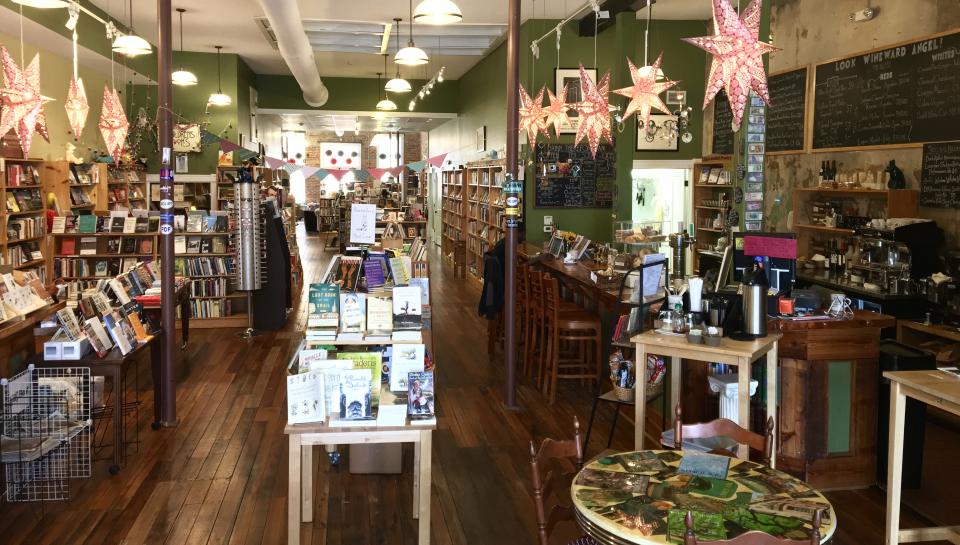 Scuppernong Books opened on December 21, 2013 and has been an essential part of the rebirth of downtown Greensboro ever since. We are a general interest/literary bookstore featuring fiction and poetry along with a remarkable children’s section and a broad range of general interest titles.

Within the store is a cafe serving organic coffee and espresso, wine, and beer sourced primarily from local small businesses. We also partner with Jerusalem Market for sandwiches, salads and more substantial fare.

Scuppernong Books also hosts hundreds of events a year, bringing in writers from around the world, the country, and the state. In 2019, we hosted over 250 writers, as well as theatre, music, dance, and community conversation.

In 2017, Scuppernong Books was instrumental in the formation of the Greensboro Literary Organization, a separate non-profit organization which stages the annual Greensboro Bound Literary Festival, and brings authors into the Guilford County Schools through their Authors Engaging Students program.

In 2018, we formed Scuppernong Editions, an eclectic small press.

Scuppernong Books believes that independent bookstores have an important role to fill in a community.

We hope to live up to that responsibility with an openness to ideas, a respect for all the individuals that make up our Greensboro community, and a willingness to have fun doing so.

This feature require that you enable JavaScript in your browser.
END_OF_DOCUMENT_TOKEN_TO_BE_REPLACED

This feature require that you enable JavaScript in your browser.
END_OF_DOCUMENT_TOKEN_TO_BE_REPLACED

This feature require that you enable JavaScript in your browser.
END_OF_DOCUMENT_TOKEN_TO_BE_REPLACED