An Afternoon with Wiley Cash, When Ghosts Come Home 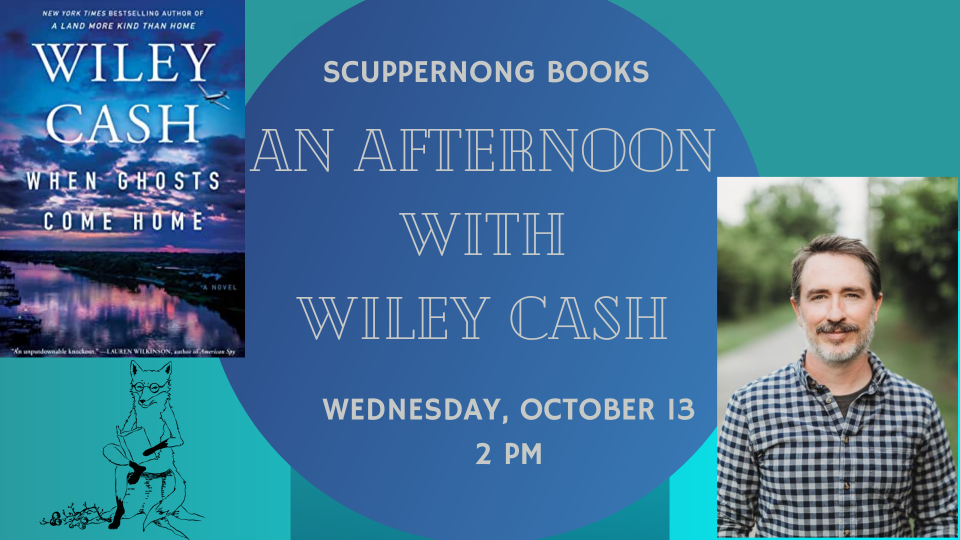 The eagerly awaited novel from the New York Times bestselling author of A Land More Kind Than Home,

a tender and haunting story of a father and daughter, crime and forgiveness, race and memory.

When the roar of a low-flying plane awakens him in the middle of the night, Sheriff Winston Barnes knows something strange is happening at the nearby airfield on the coast of North Carolina. But nothing can prepare him for what he finds: a large airplane has crash-landed and is now sitting sideways on the runway, and there are no signs of a pilot or cargo. When the body of a local man is discovered—shot dead and lying on the grass near the crash site—Winston begins a murder investigation that will change the course of his life and the fate of the community that he has sworn to protect.

Everyone is a suspect, including the dead man. As rumors and accusations fly, long-simmering racial tensions explode overnight, and Winston, whose own tragic past has followed him like a ghost, must do his duty while facing the painful repercussions of old decisions. Winston also knows that his days as sheriff may be numbered. He’s up for re-election against a corrupt and well-connected challenger, and his deputies are choosing sides. As if these events weren’t troubling enough, he must finally confront his daughter Colleen, who has come home grieving a shattering loss she cannot fully articulate.

As the suspense builds and this compelling mystery unfolds, Wiley Cash delves deep into the hearts of these richly drawn, achingly sympathetic characters to reveal the nobility of an ordinary man struggling amidst terrifying, extraordinary circumstances.

"I loved it and devoured it with fury, straight to its blazing end.” —Lily King, author of Writers & Lovers

"A treatise on race in America wrapped in a family drama wrapped in a mystery, it brings us a thoughtful examination of a good man's struggle to do right under trying circumstances. Cash puts his whole heart on the page with these flawed, true characters, and the reward is ours."

"A fascinating, nuanced meditation on life - both the living of it and the taking of it - in the crucible of small town America.  Wiley Cash is our guide through this maze of old secrets and fresh hurts. Take his hand, follow his lead and face the truth." -- S.A. Cosby, author of Blacktop Wasteland

“When Ghosts Come Home is a gripping mystery as complex and layered as the characters who inhabit it. Set in 1984, Wiley Cash’s exploration of race, justice, and grief – of the fault lines that rip apart families and communities – could not be more timely.” -- Lou Berney, author of November Road

The Last Ballad: A Novel (Paperback)

A Land More Kind Than Home: A Novel (Paperback)

This feature require that you enable JavaScript in your browser.
END_OF_DOCUMENT_TOKEN_TO_BE_REPLACED

This feature require that you enable JavaScript in your browser.
END_OF_DOCUMENT_TOKEN_TO_BE_REPLACED

This feature require that you enable JavaScript in your browser.
END_OF_DOCUMENT_TOKEN_TO_BE_REPLACED