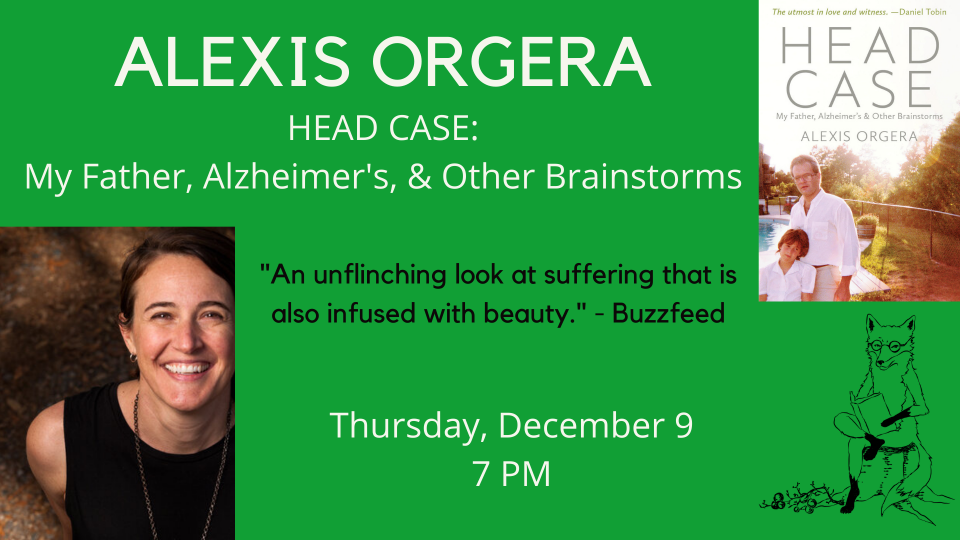 Head Case is a memoir in fragments, a lyric experiment in the immediacy of grief. Written during the end stages of Orgera's father’s Alzheimer’s Disease, Head Case chronicles the visceral and often painful experience of a daughter watching her father disappear. In 2010, Alexis moved from Los Angeles to Florida with her then-husband to be near her parents as they navigated her dad’s early Alzheimer’s diagnosis at age 52. During this time, she spent days with her dad—painting, listening to music, taking walks, reading poems, sitting on the porch and later in the courtyard of his memory facility—and recording these moments while examining her own memories through the lens of narrative, mythology and religion, visual art, migraines, ghosts, poetry, and science—all to understand what it means to be a human unraveling. In the end, Head Case is both a deep lament for a well-loved man and an exploration of what it means to live a good life.

“With unblinking honesty, Orgera’s kaleidoscopic narrative folds together family history, medical research, philosophy, theology, art and poetry, in her quest to understand the magnitude of such staggering loss. ‘What invisible rope connects father and daughter?’ Orgera asks. The answer—sustained across the most heartbreaking and unbridgeable gap—is the utmost in love and witness.” —Daniel Tobin, author of Blood Labors

“Alzheimer’s disease disorients not only the patient, but everyone in their orbit. It seems like an impossible task to convey, in writing, what this experience is like. And yet Alexis Orgera succeeds—she submerges the reader in a world of linguistic chaos, blending poetry and medical terminology, memoir and philosophy. I emerged from this book aching with grief for Orgera’s family’s pain, yet grateful for her stark, terrible and beautiful words.” —Sarah Leavitt, author of Tangles: A Story About Alzheimer’s, My Mother and Me

She studied literature New College of Florida back in the 90s and got an MFA in poetry from Emerson College. Since then, she's done a little of everything: college prof, co-owner of a children’s book press, high school teacher, librarian, copyeditor, literary magazine editor, city magazine editor, freelance writer and editor, dog walker, nanny, salesperson at a pricey children’s clothing store, manager of a few coffee shops, and a bookseller in three cities: Sarasota, Portland, and Savannah. She's wandered: born in Connecticut, grew up in South Carolina, went to college in Florida (and lived there a decade later) and grad school in Massachusetts, and she's made fleeting homes in Santa Monica and Guerneville, California; Newport, Rhode Island; Portland, Oregon; Florence, Italy; Savannah, Georgia; and Greensboro, North Carolina. Lately, she's literally putting down roots: planting herbs and vegetables on urban farms and backyard patios and everywhere in between.

This feature require that you enable JavaScript in your browser.
END_OF_DOCUMENT_TOKEN_TO_BE_REPLACED

This feature require that you enable JavaScript in your browser.
END_OF_DOCUMENT_TOKEN_TO_BE_REPLACED

This feature require that you enable JavaScript in your browser.
END_OF_DOCUMENT_TOKEN_TO_BE_REPLACED