(Scroll Down for Sign-in Information)

For me, the American story is about “mixedness” — about the ways in which people of various backgrounds and beliefs have come together, oftentimes despite themselves, to make up our racial stew. It was true during the era of Black Cloud Rising, and is all the more so now, even as we, as a society, continue to want to resist it. This is what I continue to try to explore in my writing, including in my forthcoming memoir/essay from The New Yorker. --David Wright Faladé 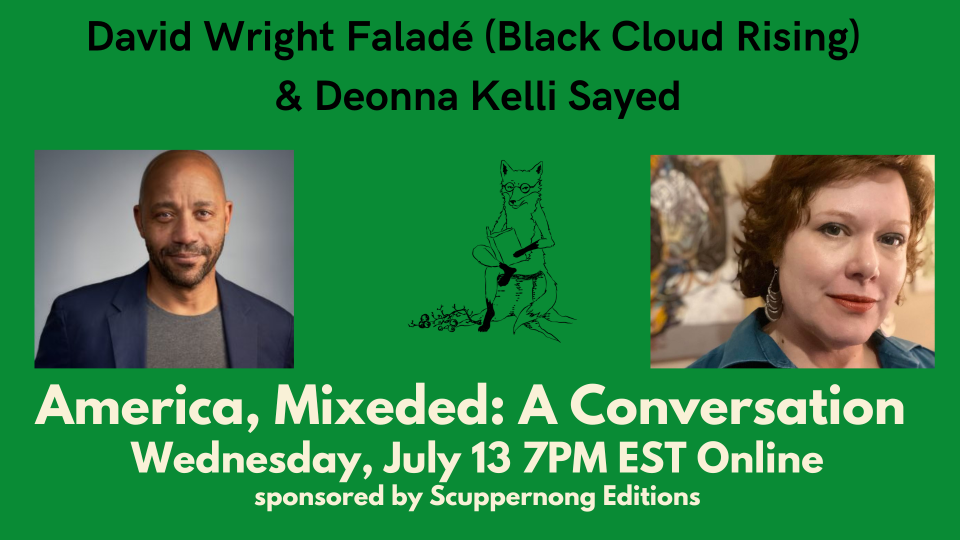 “Faladé’s book is so accessible and rousing, though, that you hope it becomes available as a mass-market paperback, in packaging that more clearly announces: This book is a straight-up page-turner. There are no braided points of view here, no too-pretty words, no splintered syntax. No leaden diagnoses of the human predicament belch on the smoky skyline. The nature of the American experiment is implicitly questioned but not burned to the ground… This is a classic war story told simply and well, its meanings not forced but allowed to bubble up.”—Dwight Garner, New York Times

David Wright Faladé is a professor of English at the University of Illinois and the Mary Ellen von der Heyden Fellow at the New York Public Library’s Cullman Center for Scholars and Writers. He is the co-author of the young adult novel Away Running and the nonfiction book Fire on the Beach: Recovering the Lost Story of Richard Etheridge and the Pea Island Lifesavers, which was a New Yorker notable selection and a St. Louis-Dispatch Best Book of 2001. The recipient of the Zora Neale Hurston/Richard Wright Award, he has written for the New Yorker, the Village Voice, the Southern Review, Newsday, and more.

Deonna Kelli Sayed is fifth-generation Florida-born descendant of a Catawba family (Ayers-Kegg-Stephens) that helped settle the rural Panhandle area where she grew up. Raised Southern Baptist (in a church her Catawba great-great grandmother helped establish), she became Muslim twenty-five years ago. Deonna has lived in the Middle East and Central Asia; her Afghan-American son was born in Baku, Azerbaijan. Deonna’s work is featured online and in various anthologies, including, Love, Inshallah: The Secret Love Lives of American Muslim Women; Everywhere Stories: Short Fiction From a Small Planet, Vol III, and New Moons:  Contemporary Writings By North American Muslims. Her essay, “Contested Whiteness: True Tales of a White Muslim Woman” was made into an award-winning short film, Joe and the Shawl, by Nicole Bollivian. She is currently working on novel set in North Florida that explores the Panhandle’s historical, cultural, and racial hybridity. Deonna works for the North Carolina Writers’ Network, the state’s largest literary arts nonprofit, and represents the PEN America NC Piedmont Chapter.

This feature require that you enable JavaScript in your browser.
END_OF_DOCUMENT_TOKEN_TO_BE_REPLACED

This feature require that you enable JavaScript in your browser.
END_OF_DOCUMENT_TOKEN_TO_BE_REPLACED

This feature require that you enable JavaScript in your browser.
END_OF_DOCUMENT_TOKEN_TO_BE_REPLACED