This is a Hybrid Event. It will take place both In Store, and Online as a Live Zoom Event

Scroll Down for Zoom Registration Information 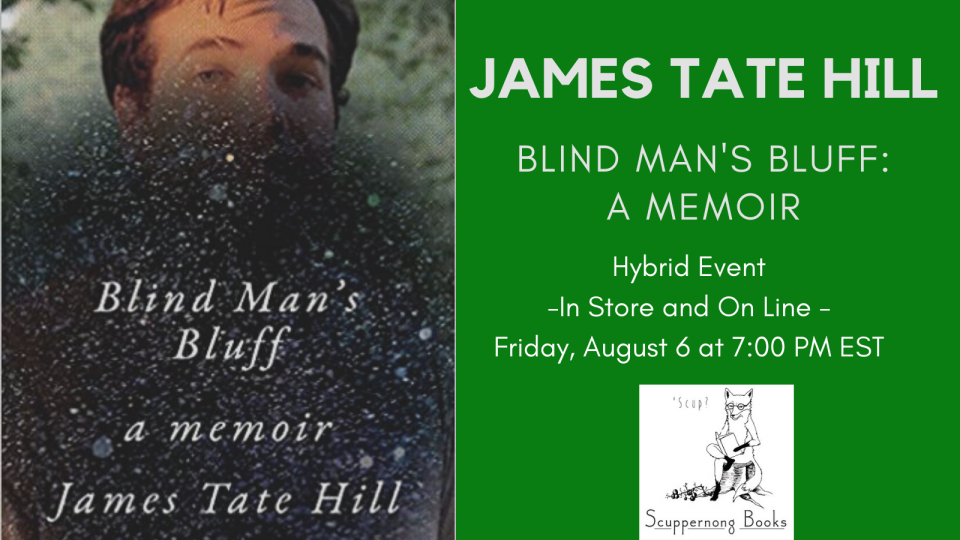 At age sixteen, James Tate Hill was diagnosed with Leber’s hereditary optic neuropathy, a condition that left him legally blind. When high-school friends stopped calling and a disability counselor advised him to aim for C’s in his classes, he tried to escape the stigma by pretending he could still see.

In this unfailingly candid yet humorous memoir, Hill discloses the tricks he employed to pass for sighted, from displaying shelves of paperbacks he read on tape to arriving early on first dates so women would have to find him. He risked his life every time he crossed a street, doing his best to listen for approaching cars. A good memory and pop culture obsessions like Tom Cruise, Prince, and all things 1980s allowed him to steer conversations toward common experiences.

For fifteen years, Hill hid his blindness from friends, colleagues, and lovers, even convincing himself that if he stared long enough, his blurry peripheral vision would bring the world into focus. At thirty, faced with a stalled writing career, a crumbling marriage, and a growing fear of leaving his apartment, he began to wonder if there was a better way.

"Told with humor and grace, Blind Man’s Bluff is a story of reinventions―ones both enormous and minute, ones both forced and earned. It’s also an education, and an illumination."
― Rebecca Makkai, Pulitzer Prize–finalist author of The Great Believers

"Compelling and honest, James Tate Hill writes of the isolation, confusion, and longing for connection, which is what it means to be human. A gripping and unflinching journey of love, acceptance, and finding the courage to tell your own story."
― Alison Stine, author of Road Out of Winter

"Reading Blind Man’s Bluff is like going out for coffee with your funniest friend. It’s also about which Golden Girl you’d most want your doctor to resemble, assuming that your doctor must resemble a Golden Girl. (The answer is Dorothy. Obviously.) It’s a smart, thoughtful, and hilarious book, and it will engage you from the first page to the last."
― Best-selling writer Carolyn Parkhurst, author of Harmony

"Once I started reading, I couldn’t stop. Hill’s narratives on disability, pop culture, and just getting through life are filled with heartbreak, humor, and hope."
― Beth (Bich Minh) Nguyen, author of Stealing Buddha’s Dinner
James Tate Hill is an editor for Monkeybicycle and contributing editor at Literary Hub, where he writes a monthly audiobooks column. The Best American Essays has chosen two of his works as "Notable," and he won the Nilsen Literary Prize for a First Novel for Academy Gothic. Born in West Virginia, he lives in Greensboro, North Carolina.
Register for the Zoom Live Feed here.

This feature require that you enable JavaScript in your browser.
END_OF_DOCUMENT_TOKEN_TO_BE_REPLACED

This feature require that you enable JavaScript in your browser.
END_OF_DOCUMENT_TOKEN_TO_BE_REPLACED

This feature require that you enable JavaScript in your browser.
END_OF_DOCUMENT_TOKEN_TO_BE_REPLACED