RSVP for this event below 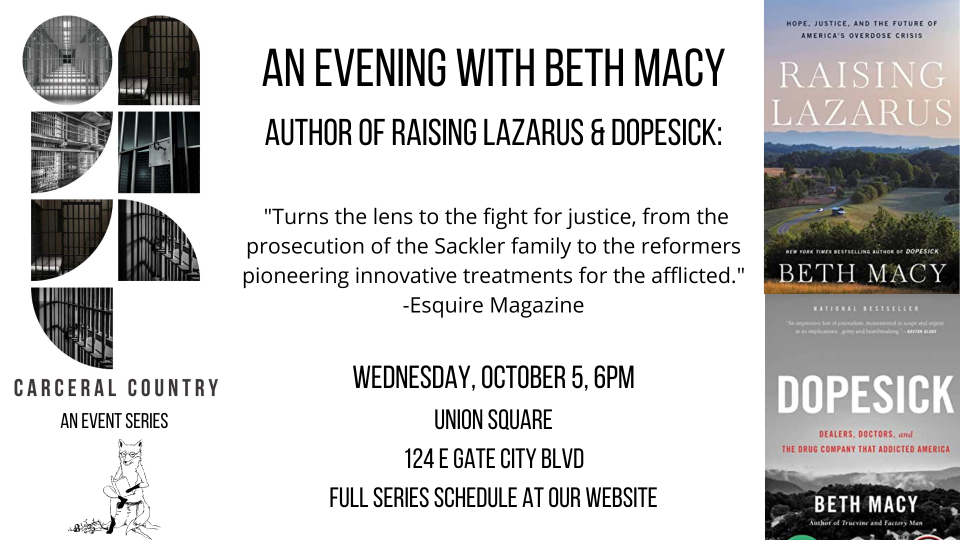 PLEASE NOTE: THIS EVENT WILL BE HELD AT THE UNION SQUARE BUILDING

Nearly a decade into the second wave of America's overdose crisis, pharmaceutical companies have yet to answer for the harms they created. As pending court battles against opioid makers, distributors, and retailers drag on, addiction rates have soared to record-breaking levels during the COVID pandemic, illustrating the critical need for leadership, urgency, and change. Meanwhile, there is scant consensus between law enforcement and medical leaders, nor an understanding of how to truly scale the programs that are out there, working at the ragged edge of capacity and actually saving lives.

Distilling this massive, unprecedented national health crisis down to its character-driven emotional core as only she can, Beth Macy takes us into the country’s hardest hit places to witness the devastating personal costs that one-third of America's families are now being forced to shoulder. Here we meet the ordinary people fighting for the least of us with the fewest resources, from harm reductionists risking arrest to bring lifesaving care to the homeless and addicted to the activists and bereaved families pushing to hold Purdue and the Sackler family accountable. These heroes come from all walks of life; what they have in common is an up-close and personal understanding of addiction that refuses to stigmatize—and therefore abandon—people who use drugs, as big pharma execs and many politicians are all too ready to do.

Like the treatment innovators she profiles, Beth Macy meets the opioid crisis where it is—not where we think it should be or wish it was. Bearing witness with clear eyes, intrepid curiosity, and unfailing empathy, she brings us the crucial next installment in the story of the defining disaster of our era, one that touches every single one of us, whether directly or indirectly. A complex story of public health, big pharma, dark money, politics, race, and class that is by turns harrowing and heartening, infuriating and inspiring, Raising Lazarus is a must-read for all Americans.

"As if we needed one more reminder of Beth Macy's phenomenal narrative journalism, RAISING LAZARUS takes us to the front lines of the fight for the nation's health. Macy finds unfamiliar heroes in places most of us would lack the will or imagination to explore. It is Macy's commitment to defamiliarizing the opioid epidemic that has, strangely and thankfully, helped so many Americans understand that none of our families are alone in this brutally pervasive fight for our lives."

"Macy brings her empathetic reporter's craft to the oft-ignored problem solvers on the ground---those who, as Macy writes, didn't wait around for justice. Macy didn't either. Unlike so many laws, court decisions, and news stories, Raising Lazarus does right by the victims of the opioid crisis"

“Macy’s gripping follow-up to the mega-bestselling Dopesick…turns the lens to the fight for justice, from the prosecution of the Sackler family to the reformers pioneering innovative treatments for the afflicted. Enlightening and exhaustive, it’s at once a damning exposé about greed and a moving paean to the power of community activism.”―ESQUIRE (20 Best Books of Summer)

Beth Macy is a journalist who writes about outsiders and underdogs. Her writing has won more than two dozen national journalism awards, including a Nieman Fellowship for Journalism at Harvard, a J. Anthony Lukas Prize for "Factory Man,” and an L.A. Times Book Prize for “Dopesick,” which was made into a Peabody Award-winning series for Hulu starring Michael Keaton. All three of her books, including her second book, “Truevine,” were instant New York Times bestsellers.

Her fourth book with Little, Brown and Co., “Raising Lazarus: Hope, Justice, and the Future of America’s Overdose Crisis,” publishes in August 2022. It is the essential follow-up to “Dopesick”: an account of the activists and ordinary people working to fight the crisis by saving lives, erasing the stigma of addiction, and holding those in power—from drugmakers to lawmakers—responsible.

This feature require that you enable JavaScript in your browser.
END_OF_DOCUMENT_TOKEN_TO_BE_REPLACED

This feature require that you enable JavaScript in your browser.
END_OF_DOCUMENT_TOKEN_TO_BE_REPLACED

This feature require that you enable JavaScript in your browser.
END_OF_DOCUMENT_TOKEN_TO_BE_REPLACED