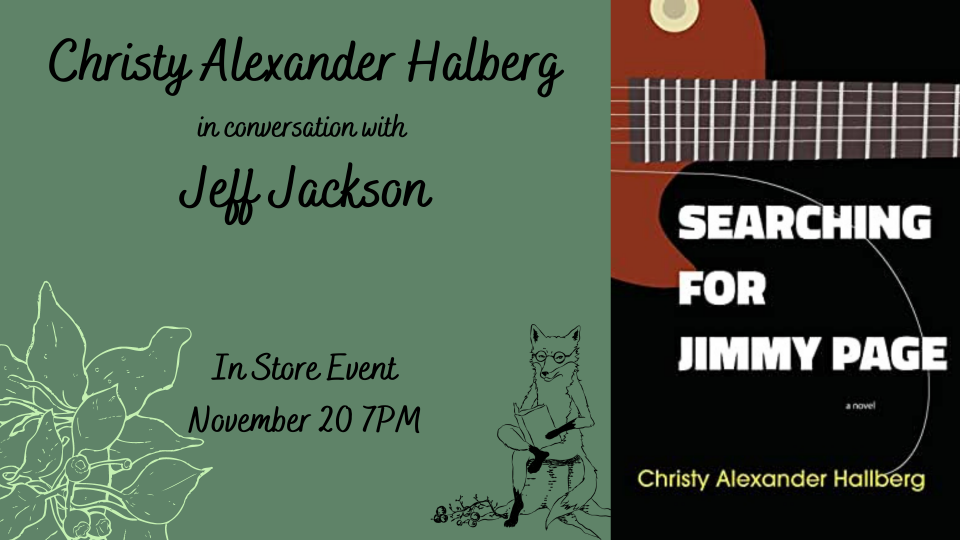 The unraveling of eighteen-year-old Luna Kane’s haunted past begins in the winter of 1988, when her dying great-grandfather, a self-proclaimed faith healer, claims he hears phantom owls crying in the night. “Them owls, like music. Can you hear the music?” he implores her in his final moments, triggering Luna’s repressed memory of her dead mother’s obsession with Jimmy Page, Led Zeppelin’s legendary guitar wizard. Desperate to learn the truth about her mother’s suicide, to tease fact from family lore in order to weave her own personal narrative, Luna embarks on a pilgrimage from her family’s farm in the pines of eastern North Carolina to England, to search for the man whose music her mother held sacred, Jimmy Page.

"In her wondrous first novel, Christy Hallberg gives us a mystery, a mother-daughter love story, a paean to rock and roll, and a window into the culture of eastern North Carolina, all joined seamlessly by the elegance and poetry of her writing. It's a book that begs to be read twice, first to find out the true story of Luna's parentage, and then again, immediately but more slowly, to savor the beauty of the language." —Liza Wieland, author of Paris, 7 A.M., named one of The Best Books by Women of Summer 2019 by O, the Oprah Magazine

"Searching for Jimmy Page is an intoxicating journey into the secret world that lies hidden inside certain songs, a place of illicit promises, shifting identities, and unlikely personal connections. Hallberg's story unfolds with lyrical poise and thrums with the feral heart of the best rock and roll." —Jeff Jackson, author of Destroy All Monsters: The Last Rock Novel

"From the beginning, family has played an integral role in my passion for Led Zeppelin and Jimmy Page and in the evolution of my novel, our family lore looming large in its pages. Protagonist Luna Kane's great-grandfather is named after and inspired by my maternal great-grandfather, Jesse Baker, who died in 1946, long before I was born. I know him only as an enigmatic family legend, this man my grandmother told me took a mail order course on faith healing because he believed he could cure his wife, my great-grandmother Emily, of breast cancer. That story has stayed with me and crept into my own stories, especially Searching For Jimmy Page, the book that is the culmination of a life steeped in the music, myth, and magic of Led Zeppelin, a fascination that began when I was a teenager in the mid-1980s, with a fortuitous viewing of the band's concert film, The Song Remains the Same, on MTV with my mother and older brother Steve, who was a huge fan of the band. It is the story I was always meant to tell. "

Jeff Jackson is the author of Mira Corpora, a finalist for the Los Angeles Times Book Prize. His short fiction has appeared in Guernica, Vice, and The Collagist, and five of his plays have been produced by the Obie Award–winning Collapsable Giraffe theater company in New York City.

This feature require that you enable JavaScript in your browser.
END_OF_DOCUMENT_TOKEN_TO_BE_REPLACED

This feature require that you enable JavaScript in your browser.
END_OF_DOCUMENT_TOKEN_TO_BE_REPLACED

This feature require that you enable JavaScript in your browser.
END_OF_DOCUMENT_TOKEN_TO_BE_REPLACED