Crossing the Rift: NC Poets on 9/11 and its Aftermath 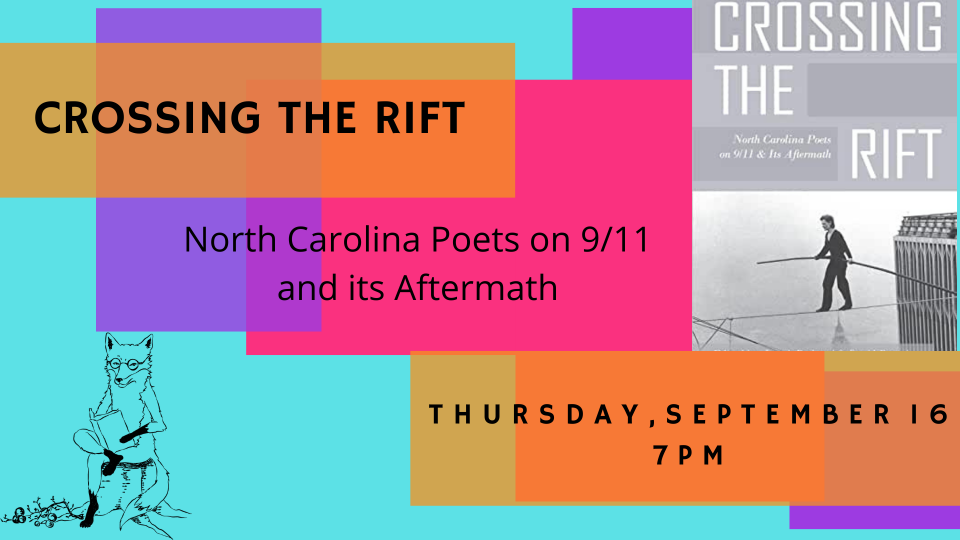 No matter how you were touched by the events of September 11, 2001, that moment continues to resonate. Crossing the Rift: North Carolina Poets on 9/11 & Its Aftermath illuminates not only what happened that day, but what continues to challenge us twenty years later: Islamophobia, the vilification of refugees and asylum-seekers, nationalism, supercharged military budgets, and rises in virulent racism and domestic terrorism. Edited by former North Carolina poet laureate Joseph Bathanti and 9/11 family member and former literature and theater director for the North Carolina Arts Council David Potorti, Crossing the Rift takes head-on what Carolyn Forche calls "the poetry of witness" and its advocacy "for a shared sense of humanity and collective resistance."

Joseph Bathanti, former Poet Laureate of North Carolina (2012-14) and recipient of the North Carolina Award in Literature, is author of seventeen books. Bathanti is McFarlane Family Distinguished Professor of Interdisciplinary Education at Appalachian State University. He served as the 2016 Charles George VA Medical Center Writer-in-Residence in Asheville, North Carolina, and is the co-founder of the Medical Center's Creative Writing Program.

David Potorti is the co-founder of September 11th Families for Peaceful Tomorrows. He served as the literature and theater director for the North Carolina Arts Council and is active in ONE Wake, a non-partisan, multi-ethnic, multi-issue group of religious congregations, associations, and other non-profits in the Wake County, North Carolina area, implementing systemic changes within society to achieve the common good.

Barbara Presnell, and Sam Barbee are among the poets who will be reading.

Crossing the Rift: North Carolina Poets on 9/11 and Its Aftermath (Paperback)

This feature require that you enable JavaScript in your browser.
END_OF_DOCUMENT_TOKEN_TO_BE_REPLACED

This feature require that you enable JavaScript in your browser.
END_OF_DOCUMENT_TOKEN_TO_BE_REPLACED

This feature require that you enable JavaScript in your browser.
END_OF_DOCUMENT_TOKEN_TO_BE_REPLACED