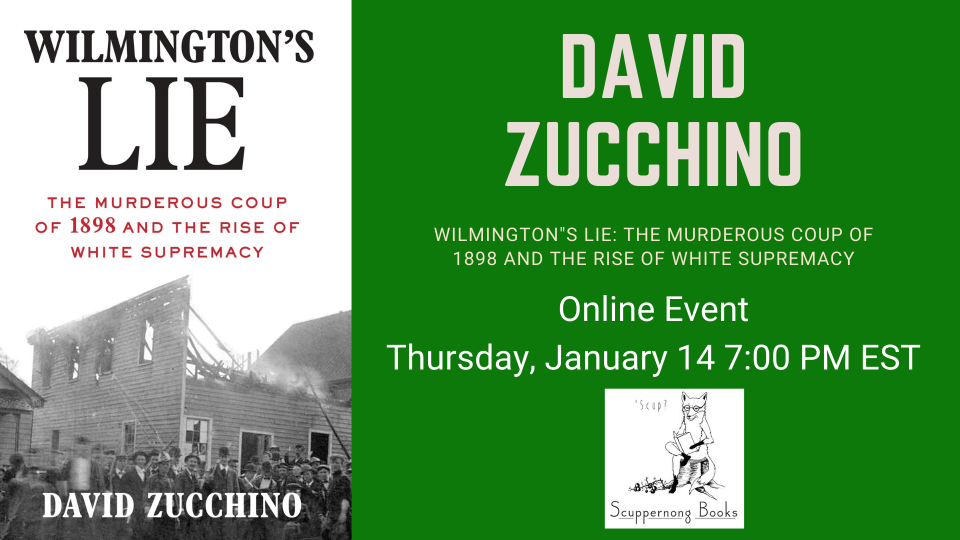 From Pulitzer Prize-winner David Zucchino comes a searing account of the Wilmington riot and coup of 1898, an extraordinary event unknown to most Americans

By the 1890s, Wilmington was North Carolina’s largest city and a shining example of a mixed-race community. It was a bustling port city with a burgeoning African American middle class and a Fusionist government of Republicans and Populists that included black aldermen, police officers and magistrates. There were successful black-owned businesses and an African American newspaper, The Record. But across the state—and the South—white supremacist Democrats were working to reverse the advances made by former slaves and their progeny.

In 1898, in response to a speech calling for white men to rise to the defense of Southern womanhood against the supposed threat of black predators, Alexander Manly, the outspoken young Record editor, wrote that some relationships between black men and white women were consensual. His editorial ignited outrage across the South, with calls to lynch Manly.

But North Carolina’s white supremacist Democrats had a different strategy. They were plotting to take back the state legislature in November “by the ballot or bullet or both,” and then use the Manly editorial to trigger a “race riot” to overthrow Wilmington’s multi-racial government. Led by prominent citizens including Josephus Daniels, publisher of the state’s largest newspaper, and former Confederate Colonel Alfred Moore Waddell, white supremacists rolled out a carefully orchestrated campaign that included raucous rallies, race-baiting editorials and newspaper cartoons, and sensational, fabricated news stories.

With intimidation and violence, the Democrats suppressed the black vote and stuffed ballot boxes (or threw them out), to win control of the state legislature on November eighth. Two days later, more than 2,000 heavily armed Red Shirts swarmed through Wilmington, torching the Record office, terrorizing women and children, and shooting at least sixty black men dead in the streets. The rioters forced city officials to resign at gunpoint and replaced them with mob leaders. Prominent blacks—and sympathetic whites—were banished. Hundreds of terrified black families took refuge in surrounding swamps and forests.

This brutal insurrection is a rare instance of a violent overthrow of an elected government in the U.S. It halted gains made by blacks and restored racism as official government policy, cementing white rule for another half century. It was not a “race riot,” as the events of November 1898 came to be known, but rather a racially motivated rebellion launched by white supremacists.

In Wilmington’s Lie, Pulitzer Prize-winner David Zucchino uses contemporary newspaper accounts, diaries, letters and official communications to create a gripping and compelling narrative that weaves together individual stories of hate and fear and brutality. This is a dramatic and definitive account of a remarkable but forgotten chapter of American history.

Wilmington's Lie: The Murderous Coup of 1898 and the Rise of White Supremacy (Paperback)

This feature require that you enable JavaScript in your browser.
END_OF_DOCUMENT_TOKEN_TO_BE_REPLACED

This feature require that you enable JavaScript in your browser.
END_OF_DOCUMENT_TOKEN_TO_BE_REPLACED

This feature require that you enable JavaScript in your browser.
END_OF_DOCUMENT_TOKEN_TO_BE_REPLACED