Denise Kiernan, We Gather Together 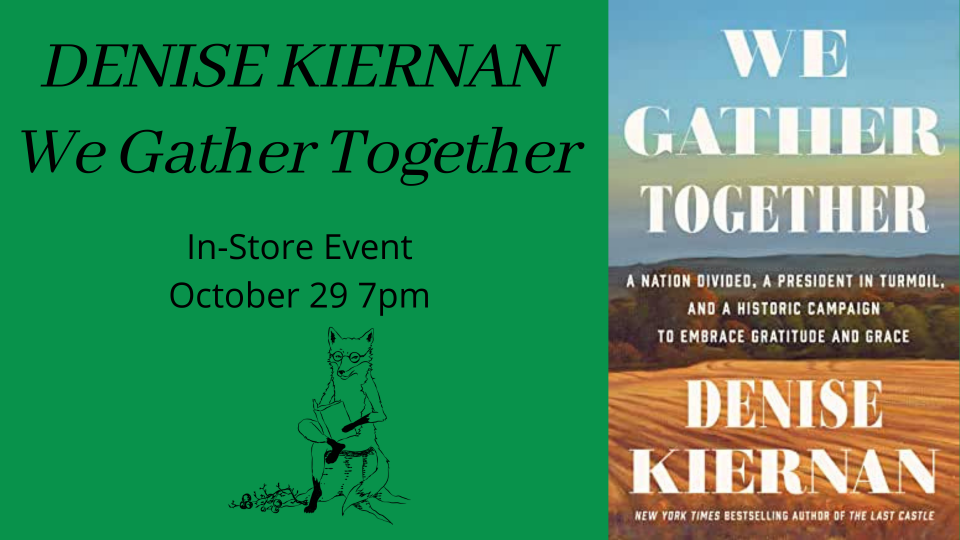 From Ancient Rome through 21st-century America, bestselling author Denise Kiernan brings us a biography of an idea: gratitude, as a compelling human instinct and a global concept, more than just a mere holiday. Spanning centuries, We Gather Together is anchored amid the strife of the Civil War, and driven by the fascinating story of Sarah Josepha Hale, a widowed mother with no formal schooling who became one of the 19th century’s most influential tastemakers and who campaigned for decades to make real an annual day of thanks.

Populated by an enthralling supporting cast of characters including Frederick Douglass, Abraham Lincoln, Sojourner Truth, Walt Whitman, Norman Rockwell, and others, We Gather Together is ultimately a story of tenacity and dedication, an inspiring tale of how imperfect people in challenging times can create powerful legacies.

Working at the helm of one of the most widely read magazines in the nation, Hale published Edgar Allan Poe, Nathaniel Hawthorne, Harriet Beecher Stowe, and others, while introducing American readers to such newfangled concepts as “domestic science,” white wedding gowns, and the Christmas tree. A prolific writer, Hale penned novels, recipe books, essays and more, including the ubiquitous children’s poem, “Mary Had a Little Lamb.” And Hale herself never stopped pushing the leaders of her time, in pursuit of her goal.

The man who finally granted her wish about a national “thanksgiving” was Lincoln, the president of the war-torn nation in which Hale would never have the right to vote.

Illuminating, wildly discussable, part myth-busting, part call to action, We Gather Together is full of unexpected delights and uneasy truths. The stories of indigenous peoples, immigrant communities, women’s rights activists, abolitionists, and more, will inspire readers to rethink and reclaim what it means to give thanks in this day and age. The book’s message of gratitude—especially when embraced during the hardest of times—makes it one to read and share, over and over, at any time of year.

“We Gather Together reminds us of the importance of gratitude in our own lives, especially during our darkest hours. It uncovers the profound ways in which a seemingly simple holiday has helped shape American history and how it has brought solace during times of upheaval and loss. Kiernan reminds us of the healing power of gratitude."

“As a researcher, Denise Kiernan is skilled at finding the lost moments of our national conscience; as a writer, she is brilliant at explaining why these moments matter. Only a writer of Kiernan's ability can cut through great swaths of history to locate the germinating seed of a national movement that is still moving us.”

Denise Kiernan is an author, journalist, and producer who has worked as a writer for more than 20 years. Her last two books—The Last Castle and The Girls of Atomic City—were instant New York Times bestsellers in both hardcover and paperback. The Last Castle was a Wall Street Journal bestseller, a finalist for the 2018 Thomas Wolfe Memorial Literary Award, and a finalist for the Southern Book Prize. The Girls of Atomic City was a Los Angeles Times and NPR bestseller, named one of Amazon’s “Top 100 Best Books of 2013,” and has been published in multiple languages. Kiernan has been a featured guest on many radio and television shows, including NPR’s Weekend Edition, PBS NewsHour, MSNBC’s Morning Joe, and The Daily Show with Jon Stewart.
Joseph D'Agnese is a journalist, author and ghostwriter who has written for both adults and children alike. He's probably best known for his books about the signers of the Declaration of Independence (Signing Their Lives Away), personal finance for freelancers (The Money Book for Freelancers), and an award-winning children's picture book on Fibonacci Sequence (Blockhead: The Life of Fibonacci). He has won a Derringer Award for his short mystery fiction, and one of his stories appeared in the Best American Mystery Stories 2015 anthology, guest-edited by author James Patterson. D'Agnese lives with his wife in North Carolina.

We Gather Together: A Nation Divided, a President in Turmoil, and a Historic Campaign to Embrace Gratitude and Grace (Hardcover)

This feature require that you enable JavaScript in your browser.
END_OF_DOCUMENT_TOKEN_TO_BE_REPLACED

This feature require that you enable JavaScript in your browser.
END_OF_DOCUMENT_TOKEN_TO_BE_REPLACED

This feature require that you enable JavaScript in your browser.
END_OF_DOCUMENT_TOKEN_TO_BE_REPLACED