Derek Baxter, In Pursuit of Jefferson 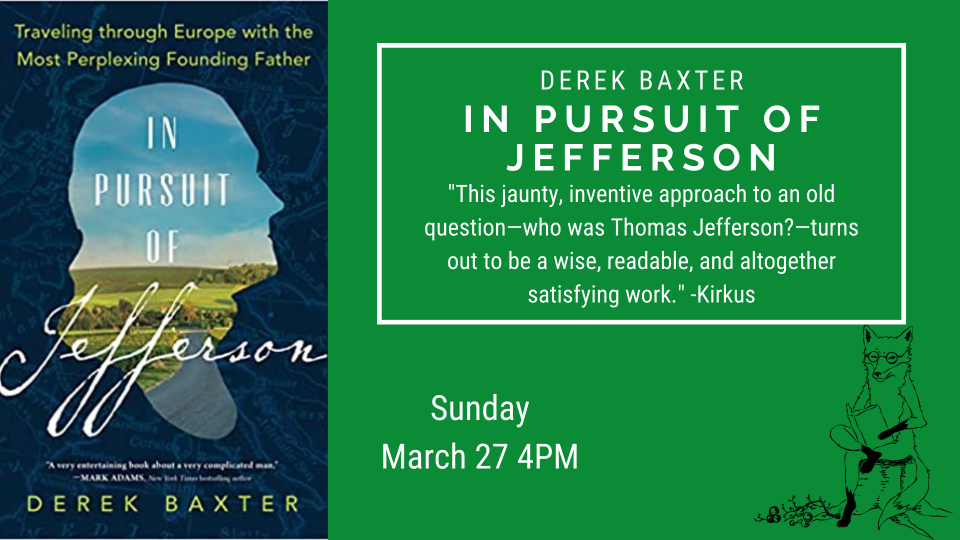 A controversial founding father. A man ready for a change. And a completely unique trip through Europe.

In 1784, Thomas Jefferson was a broken man. Reeling from the loss of his wife and stung from a political scandal during the Revolutionary war, he needed to remake himself. To do that, he traveled. Wandering through Europe, Jefferson saw and learned as much as he could, ultimately bringing his knowledge home to a young America. There, he would rise to power and shape a nation.

More than two hundred years later, Derek Baxter, a devotee of American history, stumbles on an obscure travel guide written by Jefferson―Hints for Americans Traveling Through Europe―as he's going through his own personal crisis. Who better to offer advice than a founding father himself? Using Hints as his roadmap, Baxter follows Jefferson through six countries and countless lessons. But what Baxter learns isn't always what Jefferson had in mind, and as he comes to understand Jefferson better, he doesn't always like what he finds.

In Pursuit of Jefferson is at once the story of a life-changing trip through Europe, an unflinching look at a founding father, and a moving personal journey. With rich historical detail, a sense of humor, and boundless heart, Baxter explores how we can be better moving forward only by first looking back.

"Baxter debuts with an entertaining and informative chronicle of his attempt to recreate Thomas Jefferson's travels in Europe.... Baxter manages to bridge the 18th and 21st centuries with skill. This historically informed travelogue delights."
― Publishers Weekly

"Every schoolchild knows Thomas Jefferson wrote the Declaration of Independence, but I doubt even the most dedicated reader of travel literature knows he also published a compact guide explaining the architecture, people, food and (especially) wines of Old World Europe to the citizens of the brand-new United States. This retracing of the Founding Father's life-changing time abroad is a very entertaining book about a very complicated man."
― Mark Adams, New York Times bestselling author

"This jaunty, inventive approach to an old question―who was Thomas Jefferson?―turns out to be a wise, readable, and altogether satisfying work."
― Kirkus STARRED Review

In Pursuit of Jefferson: Traveling through Europe with the Most Perplexing Founding Father (Hardcover)

This feature require that you enable JavaScript in your browser.
END_OF_DOCUMENT_TOKEN_TO_BE_REPLACED

This feature require that you enable JavaScript in your browser.
END_OF_DOCUMENT_TOKEN_TO_BE_REPLACED

This feature require that you enable JavaScript in your browser.
END_OF_DOCUMENT_TOKEN_TO_BE_REPLACED