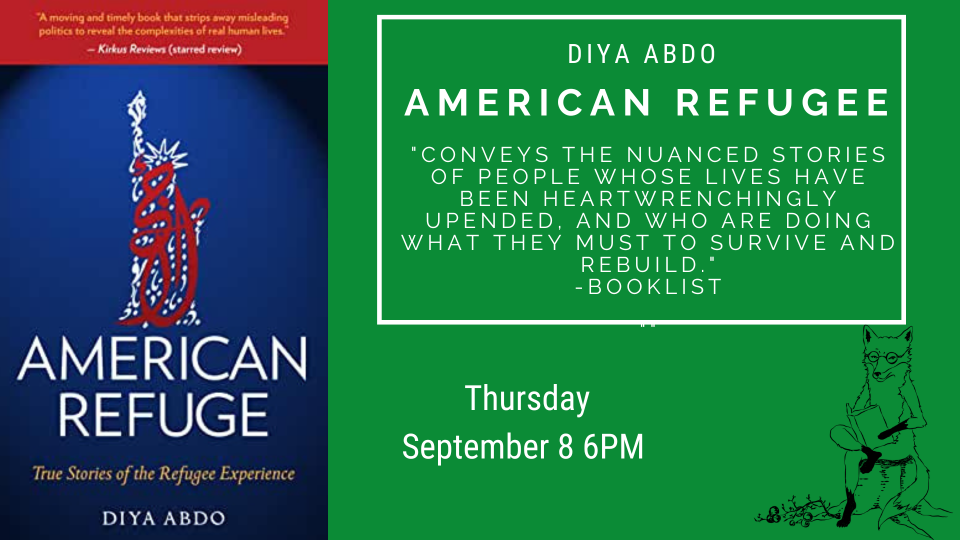 In this intimate and eye-opening book, Diya Abdo--daughter of refugees, U.S. immigrant, English professor, and activist—shares the stories of seven refugees. Coming from around the world, they’re welcomed by Every Campus A Refuge (ECAR), an organization Diya founded to leverage existing resources at colleges to provide temporary shelter to refugee families.

Bookended by Diya’s powerful essay "Radical Hospitality" and the inspiring coda “Names and Numbers,” each chapter weaves the individual stories into a powerful journey along a common theme:

The lives explored in American Refuge include the artist who, before he created the illustration on the cover of this book, narrowly escaped two assassination attempts in Iraq and now works at Tyson cutting chicken.

We learn that these refugees from Burma, Burundi, Iraq, Palestine, Syria, and Uganda lived in homes they loved, left against their will, moved to countries without access or rights, and were among the 1% of the "lucky" few to resettle after a long wait, almost certain never to return to the homes they never wanted to leave. We learn that anybody, at any time, can become a refugee.

"Diya Abdo’s American Refuge is thunderous, unforgettable testimony to the power of 'radical hospitality.' Never has a book been so timely, nor the voice of an author – and the unimaginably heroic voices of the refugees whose stories Abdo renders so brilliantly within these pages – resounded so plaintively, so fiercely, so poetically in praise of peace and shared humanity. The work Abdo has forged on the campus of Guilford College through her initiative, Every Campus a Refuge, is nothing short of miraculous. American Refuge is a primer on how to implement The Beatitudes."
-- Joseph Bathanti North Carolina Poet Laureate (2012-14) and author of Light at the Seam

Diya Abdo is the first daughter and granddaughter of Palestinian refugees to be born in their country of displacement, Jordan. Raised there, Diya received her undergraduate degree in English Language and Literature at Yarmouk University in the north of the country, a short car ride from Syria. She came to the U.S. as an International student in pursuit of a graduate degree and was a student at Drew University in NJ on Sept. 11th. A dedicated Americanist at the time, Diya’s professional and personal life trajectory were altered by the events of that day. She returned to Jordan and focused on Arab women writers and Arab and Islamic Feminisms. After a freedom of speech violation at her university in Jordan forced her to leave, Diya accepted a position in the English Department of Guilford College in Greensboro, NC in 2008. In 2015, moved by Pope Francis’ call on every parish to host a refugee family, she founded Every Campus A Refuge (ECAR) calling on every college and university to do the same. The flagship chapter at Guilford College, now one of several ECAR campuses, has hosted 80 refugees so far – 34 of them children – from Syria, Iraq, Sudan, Uganda, Rwanda, Colombia, Ecuador, Afghanistan, and the DRC. Diya is the recipient of several national community engagement awards. Currently a full professor of English, she writes poetry, fiction and creative nonfiction. Her public essays focus on the intersection of gender, political identity, and vocation. She lives in Greensboro, NC with her partner, two daughters, and four cats.

This feature require that you enable JavaScript in your browser.
END_OF_DOCUMENT_TOKEN_TO_BE_REPLACED

This feature require that you enable JavaScript in your browser.
END_OF_DOCUMENT_TOKEN_TO_BE_REPLACED

This feature require that you enable JavaScript in your browser.
END_OF_DOCUMENT_TOKEN_TO_BE_REPLACED