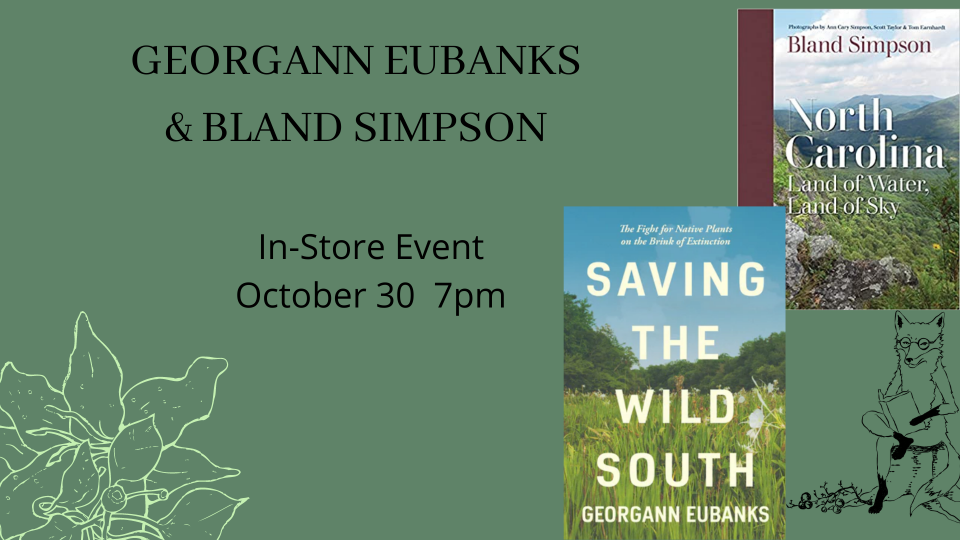 The American South is famous for its astonishingly rich biodiversity. In this book, Georgann Eubanks takes a wondrous trek from Alabama to North Carolina to search out native plants that are endangered and wavering on the edge of erasure. Even as she reveals the intricate beauty and biology of the South’s plant life, she also shows how local development and global climate change are threatening many species, some of which have been graduated to the federal list of endangered species.

Why should we care, Eubanks asks, about North Carolina’s Yadkin River goldenrod, found only in one place on earth? Or the Alabama canebrake pitcher plant, a carnivorous marvel being decimated by criminal poaching and a booming black market? These plants, she argues, are important not only to the natural environment but also to southern identity, and she finds her inspiration in talking with the heroes—the botanists, advocates, and conservationists young and old—on a quest to save these green gifts of the South for future generations. These passionate plant lovers caution all of us not to take for granted the sensitive ecosystems that contribute to the region’s long-standing appeal, beauty, and character.

Georgann Eubanks is a writer and Emmy-winning documentarian. Her most recent book is The Month of Their Ripening: North Carolina Heritage Foods through the Year.

Bland Simpson, the celebrated bard of North Carolina's sound country, has blended history, observation of nature, and personal narrative in many books to chronicle the people and places of eastern Carolina. Yet he has spent much of his life in the state's Piedmont, with regular travels into its western mountains. Here, for the first time, Simpson brings his distinctive voice and way of seeing to bear on the entirety of his home state, combining storytelling and travelogue to create a portrait of the Old North State with care and humor.

Three of the state's finest photographers come along to guide the journey: Simpson's wife and creative partner, Ann Cary Simpson, professional photographer Scott Taylor, and writer and naturalist Tom Earnhardt. Their photos, combined with Simpson's rich narrative, will inspire readers to consider not only what North Carolina has been and what it is but also what we hope it will be. This book belongs on the shelf of longtime residents, newcomers, and visitors alike.

Bland Simpson is Kenan Distinguished Professor of English and Creative Writing at the University of North Carolina at Chapel Hill. He is also pianist for The Red Clay Ramblers, the Tony Award–winning string band. In 2005 he received the North Carolina Award, the state's highest civilian honor.

Scott Taylor is a professional photographer and educator based in Beaufort, North Carolina. He currently holds the position of chair of the Photographic Technology Program at Carteret Community College in Morehead City.

Saving the Wild South: The Fight for Native Plants on the Brink of Extinction (Paperback)

This feature require that you enable JavaScript in your browser.
END_OF_DOCUMENT_TOKEN_TO_BE_REPLACED

This feature require that you enable JavaScript in your browser.
END_OF_DOCUMENT_TOKEN_TO_BE_REPLACED

This feature require that you enable JavaScript in your browser.
END_OF_DOCUMENT_TOKEN_TO_BE_REPLACED