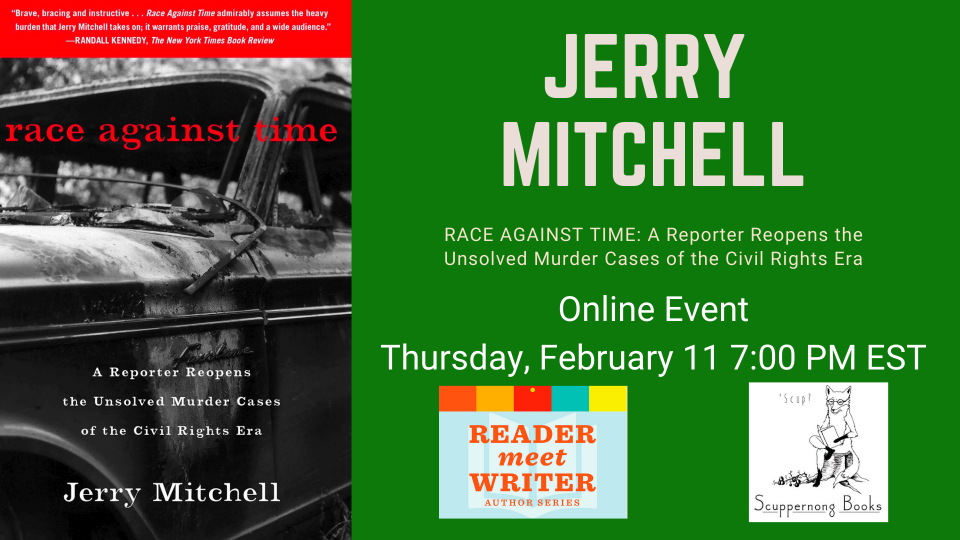 Jerry Mitchell has been called “a loose cannon,” “a pain in the ass” and a “white traitor.” He’s also one of the most decorated investigative journalists in the nation, having won over thirty national awards—including a MacArthur “Genius Grant,” Columbia’s John Chancellor Award, the Sidney Hillman Prize, and the George Polk Award as well as a Pulitzer Prize finalist. Whatever he’s been called, he has never given up in his quest to bring unpunished killers to justice. Since 1989, the investigative journalist for The Clarion-Ledger in Jackson, Mississippi, has unearthed documents, cajoled suspects and witnesses, and quietly pursued evidence in some of the nation’s most notorious killings. His reporting has helped put Klansmen behind bars.

Race Against Time: A Reporter Reopens the Unsolved Murder Cases of the Civil Rights Era (on sale February 4, 2020) by Jerry Mitchell documents the work that led to the re-openings and re-prosecutions of some of the nation’s most notorious murders, including the 1963 assassination of NAACP leader Medgar Evers, the 1963 bombing of the Sixteenth Street Baptist church in Birmingham that killed four girls, the 1966 firebombing of Vernon Dahmer, and the 1964 killings of three civil rights workers (commonly known as the “Mississippi Burning” case). These four cases were landmarks in the civil rights movement, and since then, we’ve seen an all-time high of hate crimes in America. Mitchell writes, “We must remember, to point our compass toward justice. We must remember, and then act.”

Race Against Time is the culmination of Mitchell’s actions, and it tells the inside stories of how these civil rights cold cases came back to life. Mitchell was covering courts for The Clarion-Ledger, when he was assigned to cover the press premiere of the 1988 film, Mississippi Burning. What happened inside the theater changed his life. He happened to see the film with two FBI agents who investigated the real-life case involving the KKK’s killings of three young civil rights workers in 1964 as well as a journalist who wrote about the case. He learned from them that more than 20 Klansmen had been involved in killing these young men, but no one had ever been tried for murder. That galled him, jump-starting a journey that continues to this day.

With Race Against Time, readers get an unputdownable suspense story about a chapter in American history. It’s unbelievable that killers had been walking around in broad daylight, their crimes unpunished. Like reading a nonfiction version of a John Grisham novel, Race Against Time is filled with courtroom twists and heart-pounding one-on-one confrontations with killers.

Mitchell’s investigations of unpunished killings by the KKK have hardly been popular. Some readers of his stories complained bitterly in letters to the editor. Others cancelled their subscriptions. Klansmen have repeatedly threatened him. In addition to his reporting on these cases and others, he has exposed injustices, incompetence and corruption, helping lead to investigations, exonerations, firings and reforms of state agencies. The book also reveals the courage of those involved in the civil rights movement. And this book shows the power of the press in a nation that desperately needs accountability.

“Chilling and gripping. And rest assured, Jerry Mitchell is the real deal—a dogged, fearless crusader for truth, and one hell of a story teller.”

—Erik Larson, author of The Devil in the White City

“Jerry Mitchell’s memoir revives promise for journalism. In this stirring, insider’s account of four notorious crimes from the 1960s, his tenacious allies defy race and resignation to win historic miracles for justice.”

“Jerry Mitchell is an instrument of redemption for Mississippi, and boy do we need him now. Read his story and be inspired by it.”

Jerry Mitchell worked as an investigative reporter for The Clarion-Ledger in Jackson, Mississippi, for more than three decades. His stories have helped put four Klansmen and a serial killer behind bars. Mitchell is the winner of more than thirty national awards, including a MacArthur “Genius Grant,” the George Polk Award, Columbia’s John Chancellor Award, and the Sidney Hillman Prize. He is also a Pulitzer Prize finalist and a longtime member of Investigative Reporters & Editors. In 2019, Mitchell left The Clarion-Ledger and founded the Mississippi Center for Investigative Reporting. Race Against Time is his first book.

Register for this event here:

Race Against Time: A Reporter Reopens the Unsolved Murder Cases of the Civil Rights Era (Paperback)

This feature require that you enable JavaScript in your browser.
END_OF_DOCUMENT_TOKEN_TO_BE_REPLACED

This feature require that you enable JavaScript in your browser.
END_OF_DOCUMENT_TOKEN_TO_BE_REPLACED

This feature require that you enable JavaScript in your browser.
END_OF_DOCUMENT_TOKEN_TO_BE_REPLACED