Jonathan Ward, Through the Ceiling to the Stars 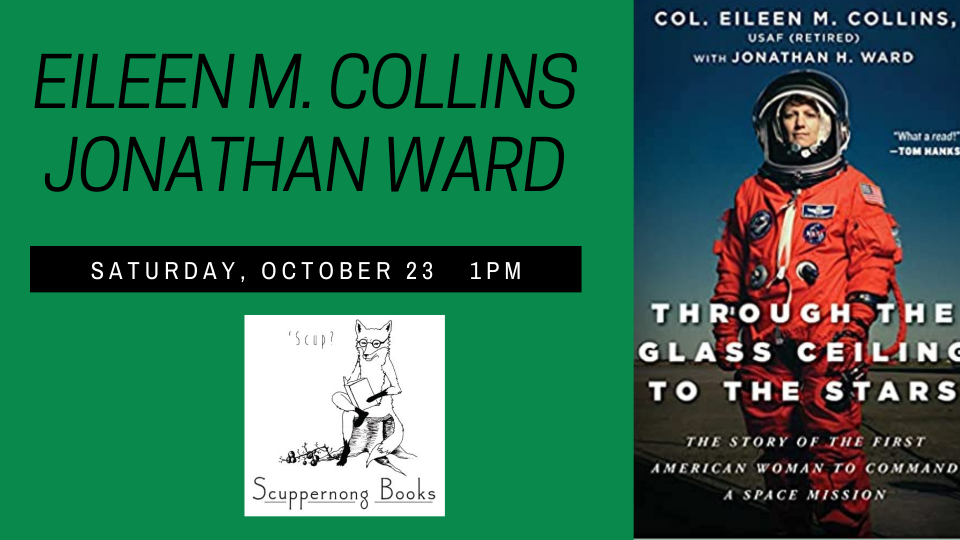 The long-awaited memoir of a trailblazer and role model who is telling her story for the first time.
Eileen Collins was an aviation pioneer her entire career, from her crowning achievements as the first woman to command an American space mission as well as the first to pilot the space shuttle to her early years as one of the Air Force’s first female pilots. She was in the first class of women to earn pilot’s wings at Vance Air Force Base and was their first female instructor pilot. She was only the second woman admitted to the Air Force’s elite Test Pilot Program at Edwards Air Force Base. NASA had such confidence in her skills as a leader and pilot that she was entrusted to command the first shuttle mission after the Columbia disaster, returning the US to spaceflight after a two-year hiatus. Since retiring from the Air Force and NASA, she has served on numerous corporate boards and is an inspirational speaker about space exploration and leadership.

Eileen Collins is among the most recognized and admired women in the world, yet this is the first time she has told her story in a book. It is a story not only of achievement and overcoming obstacles but of profound personal transformation. The shy, quiet child of an alcoholic father and struggling single mother, who grew up in modest circumstances and was an unremarkable student, she had few prospects when she graduated from high school, but she changed her life to pursue her secret dream of becoming an astronaut. She shares her leadership and life lessons throughout the book with the aim of inspiring and passing on her legacy to a new generation.

“I hope that a young explorer who reads Eileen’s book will be inspired to become the first human on Mars. Eileen proves that there is no limit to what we can do

if we stay true to our goals and keep moving forward.”—Buzz Aldrin

“Eileen is living proof to youngsters and young ladies that you can do anything you want to do with your life.”—Wally Funk, Mercury 13 pilot

“Eileen Collins and I trained for the shuttle together, flew jets together, and waited together for that first chance to rocket into space. In Through the Glass Ceiling, Eileen tells the inspiring story of how she rose through hard work and determination to become a rare exemplar of the ‘right stuff,’ leading her crews to success in orbit and commanding the first shuttle launch after the Columbia disaster. Read, be amazed, then get this book into the hands of young explorers.”—Thomas D. Jones, astronaut and author of Skywalking

Eileen M. Collins, USAF (Retired), retired from the Air Force in 2005 and from NASA in 2006, having logged more than 6,751 hours in thirty different types of aircraft and spent 872 hours in space. She is the recipient of the Distinguished Flying Cross and NASA Outstanding Leadership Medal and was inducted into the Astronaut Hall of Fame, among many other honors. Since retiring, she has traveled the world as a motivational speaker. Col. Collins serves as an advisor to the National Space Council and is a board member of the Astronauts Memorial Foundation. She is married, with two children, and lives in San Antonio, Texas.

Jonathan H. Ward works to bring the thrill of the space program to life for the general public as a Solar System Ambassador for the Jet Propulsion Laboratory and as a frequent speaker on space exploration topics to interest groups and at regional conferences. A fellow of the Royal Astronomical Society, he is the coauthor with Michael D. Leinbach of Bringing Columbia Home and author of two previous books on space exploration. He lives in Greensboro, North Carolina.

Through the Glass Ceiling to the Stars: The Story of the First American Woman to Command a Space Mission (Hardcover)

This feature require that you enable JavaScript in your browser.
END_OF_DOCUMENT_TOKEN_TO_BE_REPLACED

This feature require that you enable JavaScript in your browser.
END_OF_DOCUMENT_TOKEN_TO_BE_REPLACED

This feature require that you enable JavaScript in your browser.
END_OF_DOCUMENT_TOKEN_TO_BE_REPLACED