Joseph Bathanti, Light at the Seam 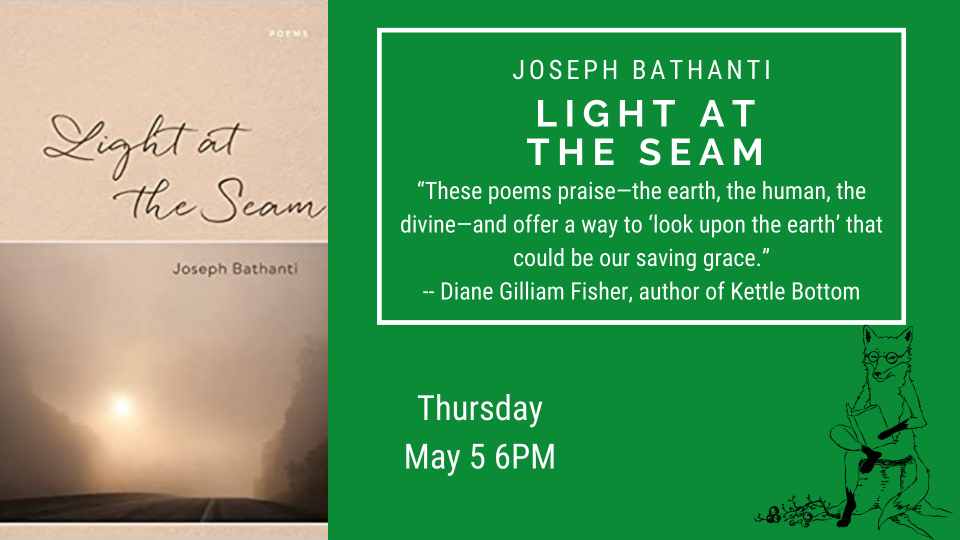 Light at the Seam, a new collection from North Carolina poet Joseph Bathanti, is an exploration of mountaintop removal in southern Appalachian coal country. The volume illuminates and champions often invisible people residing, in a precarious moment in time, on the glorious, yet besieged, Appalachian earth. Their call to defend it, as well as their faith that the land will exact its own reckoning, constitutes a sacred as well as existential quest. Rooted in social and restorative justice, Light at the Seam contemplates the earth as fundamentally sacramental, a crucible of awe and mystery, able to regenerate itself and its people even as it succumbs to them. More than mere cautionary tale, this is a volume of hope and wonder.

“Light at the Seam is exactly that―the lit language of poetry working its way back into Earth’s deepest beginnings, restoring to our threatened world its dignity as Creation. Joseph Bathanti stands in the lineage of Hopkins, in and on the mountains of West Virginia, and witnesses both their beauty and ruin. These poems praise―the earth, the human, the divine―and offer a way to ‘look upon the earth’ that could be our saving grace.”

“Joseph Bathanti’s eco-poems simultaneously praise the intricate beauty of Creation and rage against the coal industry’s destruction of Appalachian mountains and Appalachian lives.
His sacramental vision, his witness, along with his compression of sound and sense, are akin to the work of Gerard Manley Hopkins. Lamenting the felling of Binsey poplars, Hopkins cried out, ‘O if we but knew what we do. . . .’ But in this moment, we do know. Climate change tells us, and Bathanti’s poems show us, close up. In ‘Sundial, WV’ we learn that ‘children take sick from powdered coal’ and that ‘2.8 billion gallons of coal sludge’ are impounded in a slurry pond right above their elementary school. We see disastrous flooding in West Virginia when Pigeon Creek has ‘had too much to drown’ and in Kentucky when ‘a good house / built righteously . . . [is] swamped, then sundered, vitals bared . . . [its] yard washed off to Pike County.’
For Bathanti, as for Blake, ‘Everything that lives is Holy’―‘mossy black rock / pink angiosperm / lichen, leather-leaf / stonewart, ferns.’ Light at the Seam exposes the ruin spewed forth from the opposite outlook: Everything that lives is money. Greed and gluttony will get it while they can, Mother Earth, her inhabitants, and Mater Gloriosa be damned.”

Joseph Bathanti, former poet laureate of North Carolina (2012–14) and recipient of the North Carolina Award in Literature, is the author of seventeen books. He is the McFarlane Family Distinguished Professor of Interdisciplinary Education at Appalachian State University in Boone, North Carolina.

Light at the Seam: Poems (Paperback)

This feature require that you enable JavaScript in your browser.
END_OF_DOCUMENT_TOKEN_TO_BE_REPLACED

This feature require that you enable JavaScript in your browser.
END_OF_DOCUMENT_TOKEN_TO_BE_REPLACED

This feature require that you enable JavaScript in your browser.
END_OF_DOCUMENT_TOKEN_TO_BE_REPLACED