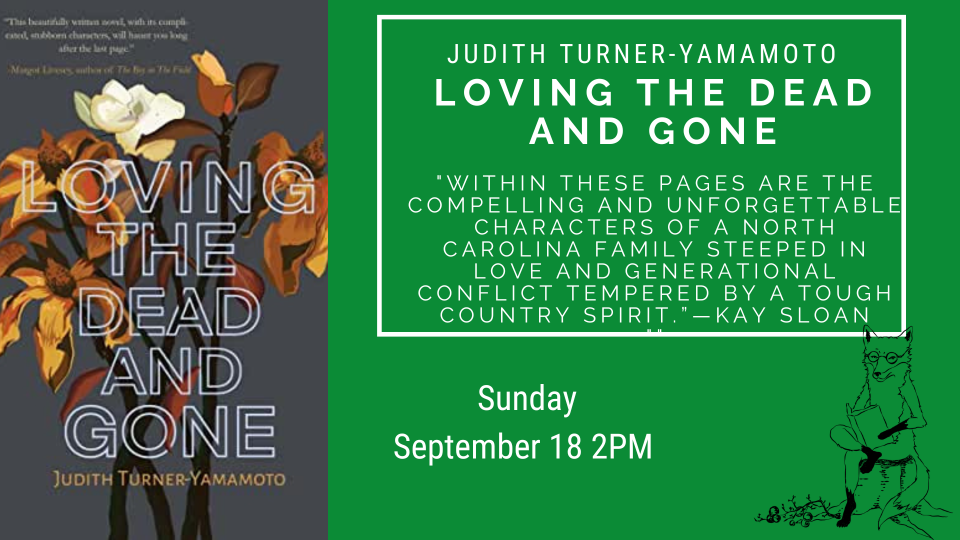 The death of Donald Ray in a freak car accident becomes the catalyst for the release of passions, needs, and hurts. Clayton’s discovery of dead Donald Ray upends his longtime emotional numbness. Darlene, the seventeen-year-old widow, struggles to reconnect with her late husband while proving herself still alive. Soon Clayton and Darlene's bond of loss and death works its magic, drawing them into an affair that brings the loneliness in Clayton’s marriage to a crisis. When Aurilla Cutter, Clayton’s mother-in-law, learns about the affair, her own memories of longing and infidelity are set loose. Like Darlene's passions—unappeased and clung to—Aurilla’s possess an intensity that denies life to the present. As Aurilla’s own forbidden and tragic story of love, death, and repeated loss alternates with Darlene's and Clayton’s, the divide of generations narrows and collapses, building to the unlikely collision.

“Judith Turner-Yamamoto's Loving the Dead and Gone is a love story that begins with a tragedy, proceeds through loss and suffering, and winds up in a place of deeply earned redemption. Though there are several characters who guide us through this unstoppable narrative, none is more breathtakingly rendered that Aurilla Cutter. Women like Aurilla, we say in the South, will live forever because they're too mean to die. Ah, but Aurilla has a past that will touch your heart and explain her present. She's an unforgettable character among a cast of unforgettables, from her put-upon daughter Berta May, to the heartbroken and fiery seventeen-year-old widow, Darlene, to Berta May's haunted husband, Clayton. Actually, everything about Loving the Dead and Gone, to Judith Turner-Yamamoto's great credit, is unforgettable." —Ed Falco, author of the New York Times Best Seller, The Family Corleone

“Judith Turner-Yamamoto has written a brilliantly lyrical novel born of her native Southern heritage. Within these pages are the compelling and unforgettable characters of a North Carolina family steeped in love and generational conflict tempered by a tough country spirit.”—Kay Sloan, author of The Patron Saint of Red Chevys, a Barnes and Noble Discover Great New Writers selection

"Turner-Yamamoto’s bittersweet fantastical debut involves the parallel stories of two grieving women… As Aurilla says near the end, “Loving the dead and gone was the sweetest love of all.” Reading this story is almost as delectable." —Publishers Weekly

Judith Turner-Yamamoto's work has appeared in StorySOUTH, Mississippi Review, American Literary Review, and in many anthologies, including Walking the Edge, Show Us Your Papers, and Gravity Dancers. Her fellowships and awards include the Virginia Arts Commission, the Ohio Arts Council, the VCCA, the Thomas Wolfe Fiction Prize, and the Virginia Screenwriting Award. An art historian, her articles are published in Travel + Leisure, Elle, Art & Antiques, Interiors, and The Boston Globe.

Loving the Dead and Gone (Paperback)

This feature require that you enable JavaScript in your browser.
END_OF_DOCUMENT_TOKEN_TO_BE_REPLACED

This feature require that you enable JavaScript in your browser.
END_OF_DOCUMENT_TOKEN_TO_BE_REPLACED

This feature require that you enable JavaScript in your browser.
END_OF_DOCUMENT_TOKEN_TO_BE_REPLACED