Linda Villarosa, Under the Skin 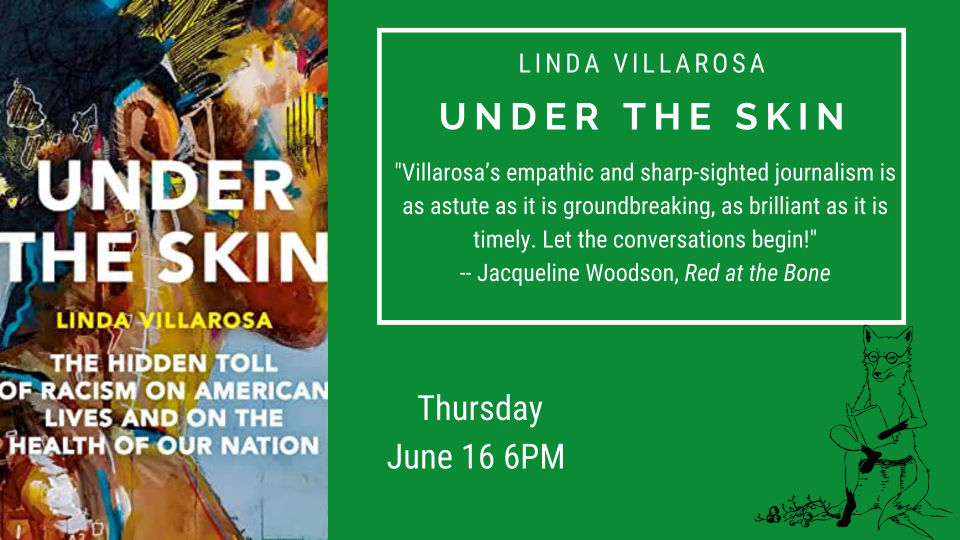 In 2018, Linda Villarosa's New York Times Magazine article on maternal and infant mortality among black mothers and babies in America caused an awakening. Hundreds of studies had previously established a link between racial discrimination and the health of Black Americans, with little progress toward solutions. But Villarosa's article exposing that a Black woman with a college education is as likely to die or nearly die in childbirth as a white woman with an eighth grade education made racial disparities in health care impossible to ignore.

Now, in Under the Skin, Linda Villarosa lays bare the forces in the American health-care system and in American society that cause Black people to “live sicker and die quicker” compared to their white counterparts. Today's medical texts and instruments still carry fallacious slavery-era assumptions that Black bodies are fundamentally different from white bodies. Study after study of medical settings show worse treatment and outcomes for Black patients. Black people live in dirtier, more polluted communities due to environmental racism and neglect from all levels of government. And, most powerfully, Villarosa describes the new understanding that coping with the daily scourge of racism ages Black people prematurely. Anchored by unforgettable human stories and offering incontrovertible proof, Under the Skin is dramatic, tragic, and necessary reading.

"Villarosa’s empathic and sharp-sighted journalism is as astute as it is groundbreaking, as brilliant as it is timely. Let the conversations begin!"
--Jacqueline Woodson, New York Times bestselling author of Red at the Bone

“It’s no secret that Black people are subject to the cumulative effects of systemic racism. But Linda Villarosa’s Under the Skin walks us through the inevitable consequences of living in a racist country on our bodies, our environments, and our healthcare system. The cultural manifestations of the physical and psychological traumas affecting Black People alter or distort all our lives. Those of us who understand that structural violence has physical ramifications will be in debt to Under the Skin. I am grateful for the arrival of this book. It is a relief to have the truth of racialized trauma exposed in such cogent, undeniable writing and with such genius analysis. This is journalism at its finest. If you read one book this year, let it be this one.”
--Claudia Rankine, author of Citizen: An American Lyric

"In Under the Skin, Linda Villarosa has written a book that will transform how you understand the relationship between race and medicine, one that makes clear the connection between our history and our health. This is a book filled with indispensable research, but also filled with humanity. Villarosa tells us important stories, and also becomes part of the story herself. I’m so glad this book exists, I will be thinking about it for a long time."
--Clint Smith, New York Times bestselling author of How the Word Is Passed

LINDA VILLAROSA is a journalism professor at the City University of New York and a contributing writer at the New York Times Magazine, where she covers the intersection of race and health. She has also served as executive editor at Essence and as a science editor at The New York Times. Her article on maternal and infant mortality was a finalist for a National Magazine Award. She is a contributor to The 1619 Project.

Caroline Rutledge Armijo is an environmental advocate, artist and mother living in Greensboro, North Carolina. She is the ninth generation of her family to live in Stokes County. Since 2010, Caroline has advocated for her rural home community around threats of fracking and living with coal ash. From 2011-2012, Caroline led the Downtown DC Kids campaign to build a playground in Downtown Washington, DC, which resulted in the 2021 opening of Franklin Park after a $21 million restoration. Caroline is a founding member of Alliance of Carolinians Together (ACT) Against Coal Ash, a state-wide group that advocated for the nation’s largest clean up of 80 million tons of coal ash in North Carolina. Caroline is the Founder and Director of The Lilies Project, a creative placemaking grant that worked with NC A&T State University to make art out of coal ash. The Lilies Project is currently exploring the following projects: building low-cost housing using encapsulated coal ash, advocating for the use of labyrinths as climate resiliency, and building a greenway in Walnut Cove, NC. She enjoys building community by incorporating story-telling, history and arts into advocacy. Caroline believes that creative placemaking provides opportunities to restore environmental justice at the local level.

Ridge Graham grew up in Rock Hill, S.C., and attended Appalachian State University, where he received a B.S. in ecology and evolutionary biology with a minor in statistics. There he found a niche as an undergraduate teaching-assistant and researcher, helping students make documentaries and educating the public about water quality. With deep roots in the Appalachian region, he enjoys hiking, biking, and playing games and music with his friends. Ridge is excited to be working with Appalachian Voices and engaging the communities of western North Carolina.

Under the Skin: The Hidden Toll of Racism on American Lives and on the Health of Our Nation (Hardcover)

This feature require that you enable JavaScript in your browser.
END_OF_DOCUMENT_TOKEN_TO_BE_REPLACED

This feature require that you enable JavaScript in your browser.
END_OF_DOCUMENT_TOKEN_TO_BE_REPLACED

This feature require that you enable JavaScript in your browser.
END_OF_DOCUMENT_TOKEN_TO_BE_REPLACED