M Dressler, Our Eyes at Night 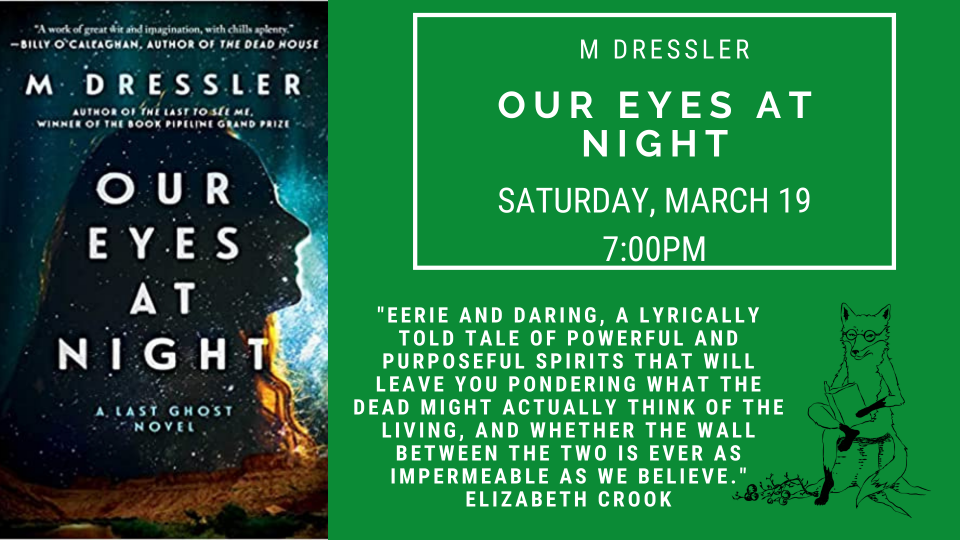 In a climate-ravaged town in the remote Utah desert, a house remodels itself, a cemetery is rearranged, and an ancient valley is suddenly haunted by a glimmering visitor. Called in to "clean" the unwanted dead, ghost hunter Philip Pratt finds himself in territory at once familiar and unfamiliar, stalking the spirit of Emma Rose Finnis, a one-hundred-year-old phantom who has never let his own spirit rest.

Yet Emma has come to this blazing desert for her own reasons—to see just how far a ghost can go in a changing world. And if a living man bars her path, she must find a way through him, even if it means risking her heart and soul. Joined by other ghosts of the West, both old and new, she will make her stand for the unexpected chance at love and home, far from the cold ocean grave where she began.

A boldly imaginative tale of loss, hope, and danger by the award-winning author of the Last Ghost series, Our Eyes at Night is a journey through a stunning landscape of inescapable consequences, for both the living and the dead.

“Our Eyes at Night is a work of great wit and imagination, with chills aplenty. Grab it if you see it; you won't be disappointed. M Dressler has a masterful grip on narrative and can write the lights out. I am new to her work but will be devouring her back catalogue in short order.”—Billy O'Callaghan, author of The Dead House

“Eerie and daring, a lyrically told tale of powerful and purposeful spirits that will leave you pondering what the dead might actually think of the living, and whether the wall between the two is ever as impermeable as we believe. ”—Elizabeth Crook, author of The Which Way Tree

“Combining the normalization of horror and surprising depths, Our Eyes at Night captures a world just beyond our reality, a world whose presence we fear not because it's scary but because it is so very familiar.”—Eric Barnes, author of The City Where We Once Lived

M Dressler is the author of six novels, including The Last to See Me, book one in The Last Ghost Series, grand prize winner of the Book Pipeline Award and winner of Audiofile Magazine's Earphone Award for Fiction. Her stories and essays have appeared in the Kenyon Review, Creative Nonfiction, and Lit Hub, among others. Her honors include the North Carolina Artists Fellowship and the Paisano Fellowship in Literature, as well as residencies and fellowships from the Fulbright Commission, Hedgebrook, and the Carson McCullers Center. She is an emerita professor at Guilford College in North Carolina and lives and writes on the Oregon coast and in the high desert of southern Utah, birthplace of the ghosts in Our Eyes at Night.

This feature require that you enable JavaScript in your browser.
END_OF_DOCUMENT_TOKEN_TO_BE_REPLACED

This feature require that you enable JavaScript in your browser.
END_OF_DOCUMENT_TOKEN_TO_BE_REPLACED

This feature require that you enable JavaScript in your browser.
END_OF_DOCUMENT_TOKEN_TO_BE_REPLACED