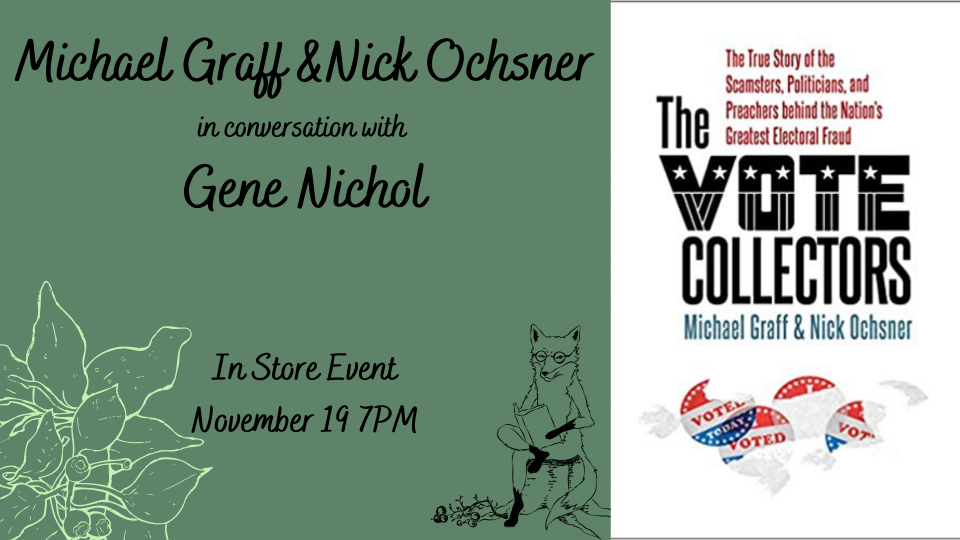 In November 2018, Baptist preacher Mark Harris beat the odds, narrowly fending off a blue wave in the sprawling Ninth District of North Carolina. But word soon got around that something fishy was going on in rural Bladen County. At the center of the mess was a local political operative named McCrae Dowless. Dowless had learned the ins and outs of the absentee ballot system from Democrats before switching over to the Republican Party. Bladen County's vote-collecting cottage industry made national headlines, led to multiple election fraud indictments, toppled North Carolina GOP leadership, and left hundreds of thousands of North Carolinians without congressional representation for nearly a year.

In The Vote Collectors, Michael Graff and Nick Ochsner tell the story of the political shenanigans in Bladen County, exposing the shocking vulnerability of local elections and explaining why our present systems are powerless to monitor and prevent fraud. In their hands, this tale of rural corruption becomes a fascinating narrative of the long clash of racism and electioneering—and a larger story about the challenges to democracy in the rural South.

At a time rife with accusations of election fraud, The Vote Collectors shows the reality of election stealing in one southern county, where democracy was undermined the old-fashioned way: one absentee ballot at a time.

A fine-grained and vivid account of the 2018 North Carolina congressional race that was overturned because of electoral fraud...Throughout, the authors weave in intriguing bits of local color and draw trenchant connections to fraud claims in the 2020 presidential election. This doggedly reported chronicle sheds light on America's political dysfunctions."—Publishers Weekly

Michael Graff is a reporter at Axios Charlotte.

Gene R. Nichol is a law professor, editorial commentator, and author of The Faces of Poverty in North Carolina: Stories from Our Invisible Citizens (UNC Press, 2018) and a number of other books. He writes commentary for Raleigh News and Observer, Charlotte Observer, the Progressive Populist, and others. He is the Boyd Tinsley distinguished professor of law at the University of North Carolina. He was director of the UNC Poverty Center until it was closed by the UNC Board of Governors for publishing articles critical of the governor and General Assembly. Since 2015, his research has been supported by the North Carolina Poverty Research Fund. Nichol was president of the College of William & Mary (2005-2008), law dean at the University of Colorado (1988-1995), and dean at UNC from 1999-2005.

The Vote Collectors: The True Story of the Scamsters, Politicians, and Preachers Behind the Nation's Greatest Electoral Fraud (Hardcover)

Indecent Assembly: The North Carolina Legislature's Blueprint for the War on Democracy and Equality (Paperback)

This feature require that you enable JavaScript in your browser.
END_OF_DOCUMENT_TOKEN_TO_BE_REPLACED

This feature require that you enable JavaScript in your browser.
END_OF_DOCUMENT_TOKEN_TO_BE_REPLACED

This feature require that you enable JavaScript in your browser.
END_OF_DOCUMENT_TOKEN_TO_BE_REPLACED