Michael Parker, I Am the Light of this World 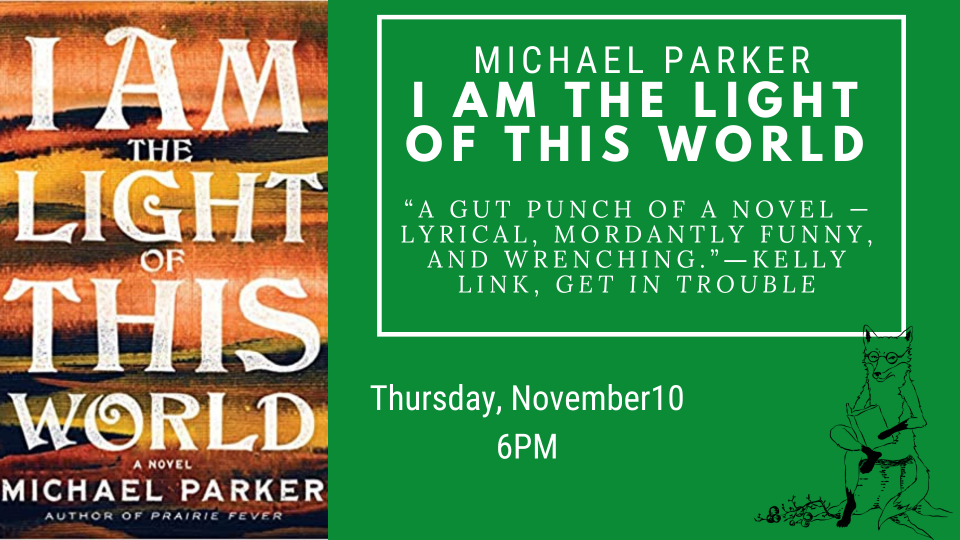 In  the  early  1970s,  in  Stovall,  Texas,  seventeen-year-old  Earl—a  loner,  dreamer,  lover of music and words—meets Tina, the new girl in town. Tina convinces Earl to drive her to see her mother in Austin, where Earl and Tina are quickly separated. Two  days  later,  Earl  is  being  questioned  by  the  police  about  Tina’s  disappearance  and the blood in the trunk of his car. But Earl can’t remember what happened in Austin,  and  with  little  financial  support  from  his  working-class  family,  he  is  sentenced for a crime he did not commit.

Forty  years  later,  Earl  is  released  into  a  world  he  can  barely  navigate.  Settling  in a small town on the Oregon coast, he attempts to establish a sense of freedom from both bars and razor wire and the emotional toll of incarceration. But just as Earl finds the rhythm he’s always sought, his past returns to endanger the new life he’s built.

Steeped in the music and atmosphere of the 1970s, I Am the Light of This World is a gritty, gripping, and gorgeously written story of loss, redemption, and the power of the imagination, perfect for fans of Ron Rash, Rachel Kushner, and Laird Hunt.

“A heart-wrenching story compounded by misguided decisions and bad luck, Earl’s life could form the basis of the blues songs he and Arthur so loved.”―Library Journal

“I Am the Light of this World is a grimy, gutsy, glorious, novel and one of my favorite books in recent memory.  Somehow, Michael Parker channeled the ghosts of Kent Haruf and Harry Crews (the good angel and the bad) to write this literary gem which is as lowdown and gritty as it is graceful and profound.  An unforgettable novel that sings out on every page.”―Nickolas Butler, author of Shotgun Lovesongs and Godspeed

“A gut punch of a novel — lyrical, mordantly funny, and wrenching.”―Kelly Link, author of Get in Trouble

“From the opening sentence on, I was transfixed, locked into the phonic level of Earl’s world and somehow magically both rooted and flying. I don’t know how Michael Parker does it. There is the rhythm of the sentences and the deep attention to sensory details but there is also something even more ineffable going on here. This novel is incredible. Read it! Read it! Read it!”―Mesha Maren, author of Perpetual West

The author of seven novels and three collections of stories, Michael Parker has been awarded four career-achievement awards: the Hobson Award for Arts and Letters, the North Carolina Award for Literature, the R. Hunt Parker Award, and the 2020 Thomas Wolfe Prize. His short fiction and nonfiction have appeared in the Washington Post, the New York Times, Oxford American, Runner’s World, Men's Journal, and others. He is a three-time winner of the O. Henry Prize for his short fiction and his work has appeared in dozens of magazines and several anthologies. He taught for twenty-seven years in the MFA Writing Program at the University of North Carolina at Greensboro, and since 2009 he has been on the faculty of the Warren Wilson Program for Writers. He lives in Austin, Texas.
Event date:
Thursday, November 10, 2022 - 6:00pm to 7:00pm
Event address:
304 S. Elm St.
Greensboro, NC 27401

This feature require that you enable JavaScript in your browser.
END_OF_DOCUMENT_TOKEN_TO_BE_REPLACED

This feature require that you enable JavaScript in your browser.
END_OF_DOCUMENT_TOKEN_TO_BE_REPLACED

This feature require that you enable JavaScript in your browser.
END_OF_DOCUMENT_TOKEN_TO_BE_REPLACED