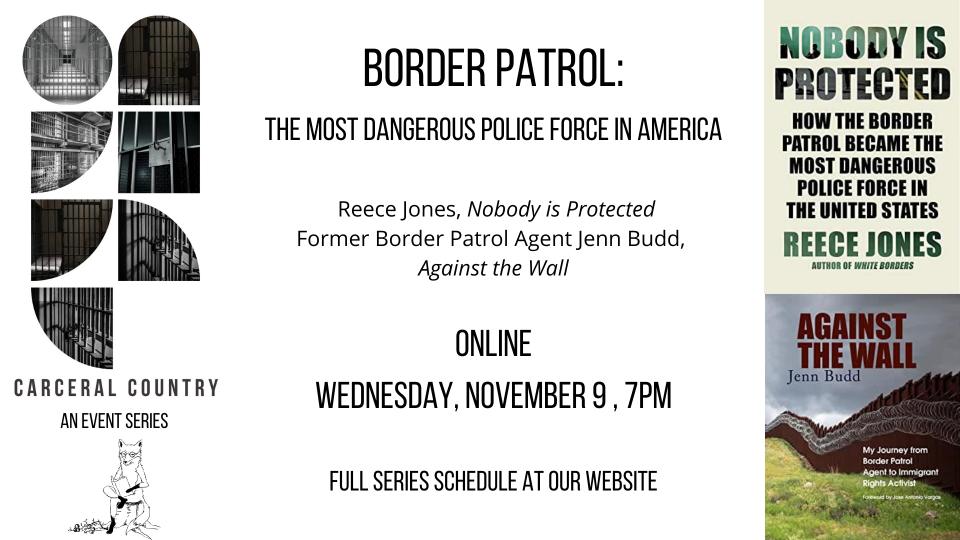 PLEASE NOTE: THIS IS AN ONLINE EVENT

Scroll down for Log-In Information

Late one July night in 2020, armed men, identified only by the word POLICE written across their uniforms, began snatching supporters of Black Lives Matter off the street in Portland, Oregon, and placing them in unmarked vans. These mysterious actions were not carried out by local law enforcement or even right-wing terrorists, but by the U.S. Border Patrol. Why was the Border Patrol operating so far from the boundaries of the United States? What were they doing at a protest that had nothing to do with immigration or the border?

Nobody Is Protected: How the Border Patrol Became the Most Dangerous Police Force in the United States is the untold story of how, through a series of landmark but largely unknown decisions, the Supreme Court has dramatically curtailed the Fourth Amendment of the Constitution in service of policing borders. The Border Patrol exercises exceptional powers to conduct warrantless stops and interrogations within one hundred miles of land borders or coastlines, an area that includes nine of the ten largest cities and two thirds of the American population.

Mapping the Border Patrol’s history from its bigoted and violent Wild West beginnings through the legal precedents that have unleashed today’s militarized force, Guggenheim Fellow Reece Jones reveals the shocking true stories and characters behind its most dangerous policies. With the Border Patrol intent on exploiting current laws to transform itself into a national police force, the truth behind their influence and history has never been more important.

“If you wondered how it could be possible for the U.S. Border Patrol to pull activists off the streets in Portland, Oregon during the summer of 2020, Nobody is Protected is the book for you. Reece Jones's rigorously researched book analyzes the Border Patrol’s extraconstitutional powers and explains the legal precedents behind it. It's also one hell of a page-turner that twists and turns from the 'Wild West' to the modern halls of power. It is a book with a purpose: always seeking to answer how the U.S.’s 'most dangerous police force' presently operates and how it impacts us all." —Todd Miller, journalist and author of Build Bridges, Not Walls

REECE JONES is a Guggenheim Fellow. He is a professor and the chair of the Department of Geography and Environment at the University of Hawai'i. He is the author of three books, the award-winning Border Walls and Violent Borders, as well as White Borders. He is the editor in chief of the journal Geopolitics and he lives in Honolulu with his family.
Jenn Budd, the only former U.S. Border Patrol agent to continually blow the whistle on this federal agency's rampant corruption, challenges us-as individuals and as a nation-to face the consequences of our actions. Her journey offers a vital perspective on the unfolding moral crisis of our time. She also gives harrowing testimony about rape culture, white privilege, women in law enforcement, LGBTQ issues, mental illness, survival and forgiveness.

"This courageous and compelling book by a Border Patrol agent-turned immigration-activist is essential reading to understand how today's heartless and abusive Border Patrol culture came into being and what needs to be done to transform immigration policy in America."

- Ruth Ben-Ghiat, author of Strongmen: Mussolini to the Present

JENN BUDD was a Senior Patrol Agent with the U.S. Border Patrol in San Diego and an intelligence agent at San Diego Sector Headquarters from 1995 to 2001 when she resigned in protest. Since 2015 she speaks out on national and local news, community panels, podcasts and radio. She regularly is consulted by academics, journalists, humanitarians, and lawmakers. She is often interviewed for outlets such as The New York Times, Newsweek, The Guardian, Washington Post, NPR, Telemundo, and many more. She is an ambassador for Define American and the Southern Border Communities Coalition (SBCC).

Against the Wall: My Journey from Border Patrol Agent to Immigrant Rights Activist (Paperback)

Nobody Is Protected: How the Border Patrol Became the Most Dangerous Police Force in the United States (Hardcover)

White Borders: The History of Race and Immigration in the United States from Chinese Exclusion to the Border Wall (Paperback)

This feature require that you enable JavaScript in your browser.
END_OF_DOCUMENT_TOKEN_TO_BE_REPLACED

This feature require that you enable JavaScript in your browser.
END_OF_DOCUMENT_TOKEN_TO_BE_REPLACED

This feature require that you enable JavaScript in your browser.
END_OF_DOCUMENT_TOKEN_TO_BE_REPLACED