SCROLL DOWN FOR REGISTRATION INFORMATION 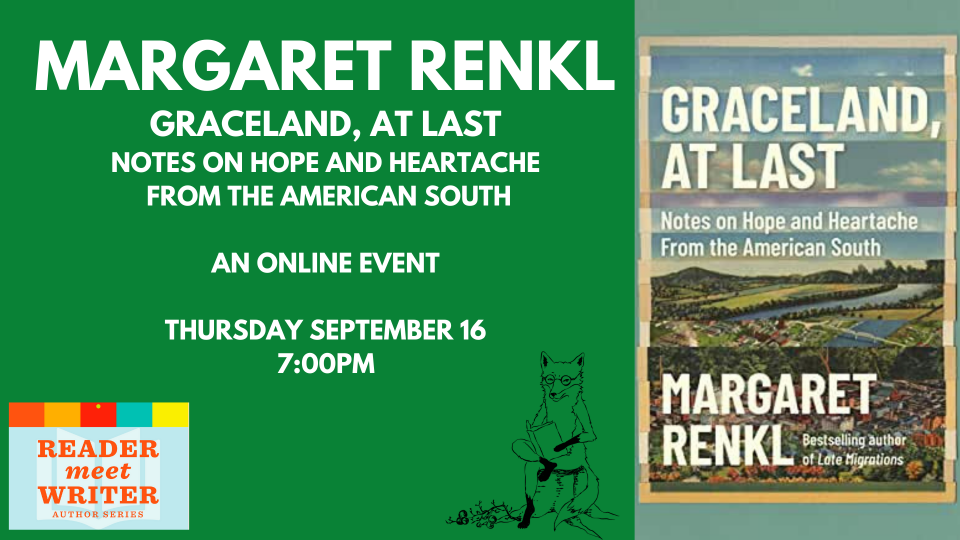 For the past four years, Margaret Renkl’s columns have offered readers of The New York Times a weekly dose of natural beauty, human decency, and persistent hope from her home in Nashville. Now more than sixty of those pieces have been brought together in this sparkling new collection.

“People have often asked me how it feels to be the ‘voice of the South,’” writes Renkl in her introduction. “But I’m not the voice of the South, and no one else is, either.” There are many Souths―red and blue, rural and urban, mountain and coast, Black and white and brown―and no one writer could possibly represent all of them. In Graceland, At Last, Renkl writes instead from her own experience about the complexities of her homeland, demonstrating along the way how much more there is to this tangled region than many people understand.

In a patchwork quilt of personal and reported essays, Renkl also highlights some other voices of the South, people who are fighting for a better future for the region. A group of teenagers who organized a youth march for Black Lives Matter. An urban shepherd whose sheep remove invasive vegetation. Church parishioners sheltering the homeless. Throughout, readers will find the generosity of spirit and deep attention to the world, human and nonhuman, that keep readers returning to her columns each Monday morning.

From a writer who “makes one of all the world’s beings” (NPR), Graceland, At Last is a book full of gifts for Southerners and non-Southerners alike.

"From her home in Nashville―'a blue dot in the red sea of Tennessee'―[Renkl] writes perceptively of the region where she was born and raised (in Alabama), educated (in South Carolina), and settled . . . Renkl vividly evokes the lush natural beauty of the rivers, old-growth forests, 'red-dirt pineywoods,' marshes, and coastal plains that she deeply loves . . . A wide-ranging look at the realities of the South." ―Kirkus Reviews

“If you’ve happened upon the poignant and off-road opinion pieces Renkl writes as a contributor to The New York Times, you already know that the natural world is something she closely observes and uses as a springboard to contemplate other, less tangible subjects. . . . Her life story and her life’s passion intertwine, like a fence post and a trumpet vine.”―Maureen Corrigan, NPR’s Fresh Air

"Graceland, At Last takes us to Renkl's homeland and shines a light on her life in the South, its complexities and its hopes. In these pages, you will find Black Lives Matter organizers, churches sheltering the homeless, and even helpful sheep. Reading Margaret Renkl is like seeing the world in color for the first time." ―Literary Hub, "Most Anticipated Books of 2021"

Graceland, at Last: Notes on Hope and Heartache from the American South (Hardcover)

This feature require that you enable JavaScript in your browser.
END_OF_DOCUMENT_TOKEN_TO_BE_REPLACED

This feature require that you enable JavaScript in your browser.
END_OF_DOCUMENT_TOKEN_TO_BE_REPLACED

This feature require that you enable JavaScript in your browser.
END_OF_DOCUMENT_TOKEN_TO_BE_REPLACED