Novelist Aaron Holland Broussard is shattered when his daughter Fannie Mae dies suddenly. As he tries to honor her memory by saving two young men from a life of crime amid their opioid-ravaged community, he is drawn into a network of villainy that includes a violent former Klansman, a far-from-holy minister, a biker club posing as evangelicals, and a murderer who has been hiding in plain sight.

(Scroll Down for Registration Information) 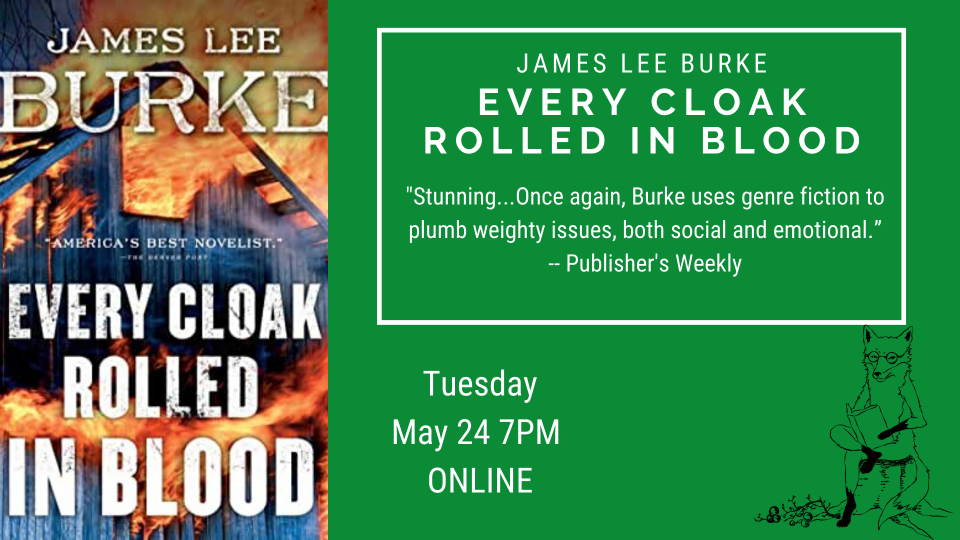 Aaron’s only ally is state police officer Ruby Spotted Horse, a no-nonsense woman who harbors some powerful secrets in her cellar. Despite the air of mystery surrounding her, Ruby is the only one Aaron can trust. That is, until the ghost of Fannie Mae shows up, guiding her father through a tangled web of the present and past and helping him vanquish his foes from both this world and the next.

Drawn from James Lee Burke’s own life experiences, Every Cloak Rolled in Blood is a devastating exploration of the nature of good and evil and a deeply moving story about the power of love and family.

"Stunning...this is one of those extraordinary crime novels that feels more like real life, with incidents and people that aren’t obviously connected piling up in the protagonist’s life, rather than a neat set of clues pointing to a culprit. Once again, Burke uses genre fiction to plumb weighty issues, both social and emotional." –STARRED review, Publishers Weekly

“Burke rolls together the driving themes that have dominated his work—the inescapable presence of evil, the restorative power of love, the desecration of the planet, humanity's long slouch toward Armageddon—into an intensely, heartrendingly personal exploration of grief.” -STARRED review, Booklist

"Less mystery than history, less history than prophecy, and all the stronger for it."– Kirkus Reviews

James Lee Burke is a New York Times bestselling author, two-time winner of the Edgar Award, and the recipient of the Guggenheim Fellowship for Creative Arts in Fiction. He has authored forty novels and two short story collections. He lives in Missoula, Montana.

Every Cloak Rolled in Blood (A Holland Family Novel) (Hardcover)

This feature require that you enable JavaScript in your browser.
END_OF_DOCUMENT_TOKEN_TO_BE_REPLACED

This feature require that you enable JavaScript in your browser.
END_OF_DOCUMENT_TOKEN_TO_BE_REPLACED

This feature require that you enable JavaScript in your browser.
END_OF_DOCUMENT_TOKEN_TO_BE_REPLACED