ONLINE: Poetry Book Club: Alive at the End of the World 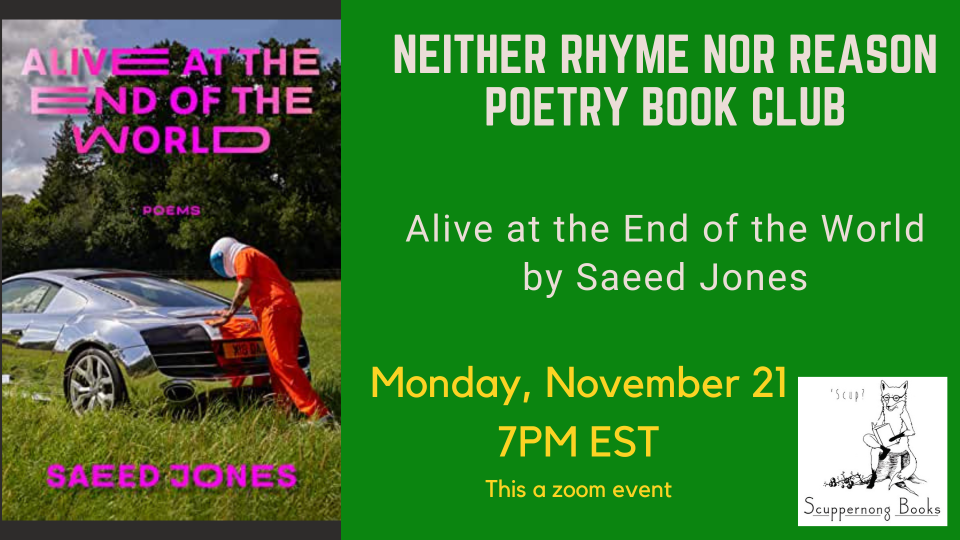 In haunted poems glinting with laughter, Saeed Jones explores the public and private betrayals of life as we know it. With verve, wit, and elegant craft, Jones strips away American artifice in order to reveal the intimate grief of a mourning son and the collective grief bearing down on all of us.

Drawing from memoir, fiction, and persona, Jones confronts the everyday perils of white supremacy with a finely tuned poetic ear, identifying moments that seem routine even as they open chasms of hurt. Viewing himself as an unreliable narrator, Jones looks outward to understand what’s within, bringing forth cultural icons like Little Richard, Paul Mooney, Aretha Franklin and Diahann Carroll to illuminate how long and how perilously we’ve been living on top of fault lines. As these poems seek ways to love and survive through America’s existential threats, Jones ushers his readers toward the realization that the end of the world is already here―and the apocalypse is a state of being.

“The potent latest from Jones excoriates an American present that refuses to learn from its past or correct for a possibly disastrous future. A kaleidoscope of grief and anger mixes with the poet’s wit, giving these timely poems a striking directness. . . . Balancing elegy with gallows humor, this penetrating collection shows Jones at his poetic best.” ―Publishers Weekly, starred review

“Jones’s latest is yet another masterly work, though sung in a distinctly different tenor. . . . [His] most free-flowing work yet, a centripetal collection where rage and pain and weariness swirl and coalesce with stunning emotional and conceptual clarity, yet so intimate it feels bled from the author’s very veins.”

“Jones unravels and reconfigures language like he’s untying a knot, then rethreads the strands in a delicate new construction. . . . Jones writes in the space between wreckage and resilience. He offers a calibrated reckoning with his own grief, cradled in ambiguity―and we wait, holding our breath, to see what is tendered next.”

“A serious argument for community and the rebellion of joy. I love [“Alive at the End of the World”] for how it shows us the importance of defending our right to pleasure.” ―United States Poet Laureate Ada Limón, NPR’s The Slowdown

Saeed Jones was born in Memphis, Tennessee, and grew up in Lewisville, Texas. His work has appeared in the New Yorker, the New York Times, and GQ, and he has been featured on public radio programs including NPR’s Fresh Air, Pop Culture Happy Hour, It’s Been A Minute with Sam Sanders, and All Things Considered.

Alive at the End of the World (Paperback)

This feature require that you enable JavaScript in your browser.
END_OF_DOCUMENT_TOKEN_TO_BE_REPLACED

This feature require that you enable JavaScript in your browser.
END_OF_DOCUMENT_TOKEN_TO_BE_REPLACED

This feature require that you enable JavaScript in your browser.
END_OF_DOCUMENT_TOKEN_TO_BE_REPLACED