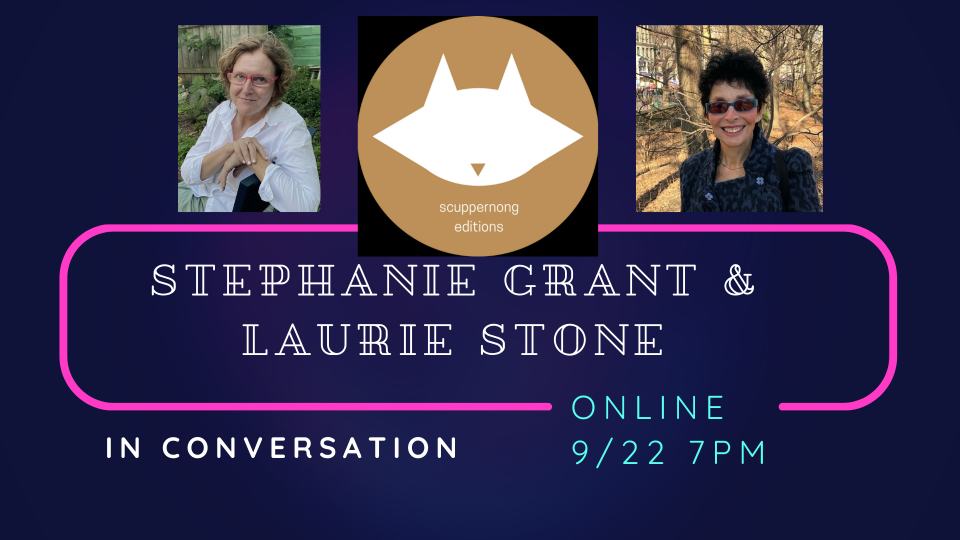 Join Stephanie Grant and Laurie Stone in a conversation about writing, writing memoir, writing from despair post-Roe, from despair in general, and what the role of the writer is in our current world.

"When, in my twenties, I came out to my parents as a lesbian, I became an object of their disgust. As a result, I worked to eliminate disgust from my repertoire of emotions."

In this hybrid memoir, novelist Stephanie Grant works to make sense of three generations of female self-disgust in her family while considering how it challenges both the American ideal of equality and our real-life experiences of intimacy. Disgust: A Memoir is funny, tender, and rigorous in its exploration of how the most difficult emotion functions both in our private lives and our collective imaginations.

"Starkly beautiful and infinitely true. Disgust is a deep and brilliant gaze into all it truly means to feel, to be human, to love."

-Jacqueline Woodson, Red to the Bone

"In this condensed, profound contemplation of disgust, Stephanie Grant traces the complexity and fearfulness of intergenerational conflict and touches on the transmissibility (or not) of mental illness. Her meditations read like prose poems, each economically summoning another intricacy of her subject. She moves with unusual grace between the universal and the highly specific, revealing startling truths about love and fear and anger and pain and redemption."

- Andrew Solomon, Far and Away, The Noonday Demon

Shifting effortless between social commentary and memoir, glimpses of history and threads of fiction, Stone, a lifelong feminist and longtime contributor to the Village Voice and NPR's Fresh Air, unapologetically observes against the backdrop of a Zoom call the evolution of feminism over the years, the gendered sexual politics underlying Jeffrey Toobin's public disgrace, rage and hope on the heels of Supreme Court Justice Ruth Bader Ginsberg's death, and the way we continue to pot and maintain our plants amidst the broken narrative of our world's future. As Stone says, It’s good this narrative has been broken. In the narrative that has been broken, people ignored the way so many things they wanted required the suffering of others.

In a time when most of us felt more alone than ever before, Laurie Stone's Streaming Now: Postcards from the Thing That Is Happening is a retroactive but no less timely reminder that we were less alone in our thoughts than we thought.

A witty, brutally honest meditation on how we live now, and most importantly, on the life worth living. Nothing is too small or too large for Laurie Stone’s laser vision—her willingness to say the things we’re not supposed to say or admit to doing the things we’re not supposed to do—all of which will keep you reading this book in one mad dash. —Gloria Jacobs, editor and activist

To my mind, Laurie Stone is a virtuouso writer, and the "streaming" form—a kind of diary derived in part from blogs she has written on this site, particularly suits her genius. Her writing is full of attitude and has a defiant vibe I find completely compelling. Yes, she wants to entertain us—she is engaged in comedy—but its comedy of a most serious kind, like all real comedy. It's not schtick. Laurie means every word and the words ring true. Read this book!

Laurie Stone is the author of Everything is Personal: Notes on Now and My Life as an Animal, Stories. She has published numerous stories in such publications as n + 1, Waxwing, Tin House, Evergreen Review, Fence, Open City, Threepenny Review, and Creative Nonfiction. She lives in New York City.

Stephanie Grant's first novel, The Passion of Alice, was published by Houghton Mifflin (1995), and was nominated for Britain's Orange Prize for Women Writers and the Lambda Award for Best Lesbian Fiction. About Grant, the Boston Globe wrote: Her prose style is relentlessly cool and stark, serving as x-ray vision that registers the hardest truths without prettification. Her second novel, Map of Ireland, (Scribner 2008) is a contemporary retelling of Huck Finn that places female sexuality and friendship at the center of a foundational American myth about race. It was nominated for the Lambda Award for Best Lesbian Fiction and was an Honor Title for the Massachusetts Book Award. Grant has received fellowships and awards by the National Endowment for the Arts, the Rona Jaffe Foundation, the Ludwig Vogelstein Foundation, and the Ohio Arts Council, among others. She currently directs the MFA Program in Creative Writing at American University.

Streaming Now: Postcards from the Thing That Is Happening (Paperback)

This feature require that you enable JavaScript in your browser.
END_OF_DOCUMENT_TOKEN_TO_BE_REPLACED

This feature require that you enable JavaScript in your browser.
END_OF_DOCUMENT_TOKEN_TO_BE_REPLACED

This feature require that you enable JavaScript in your browser.
END_OF_DOCUMENT_TOKEN_TO_BE_REPLACED