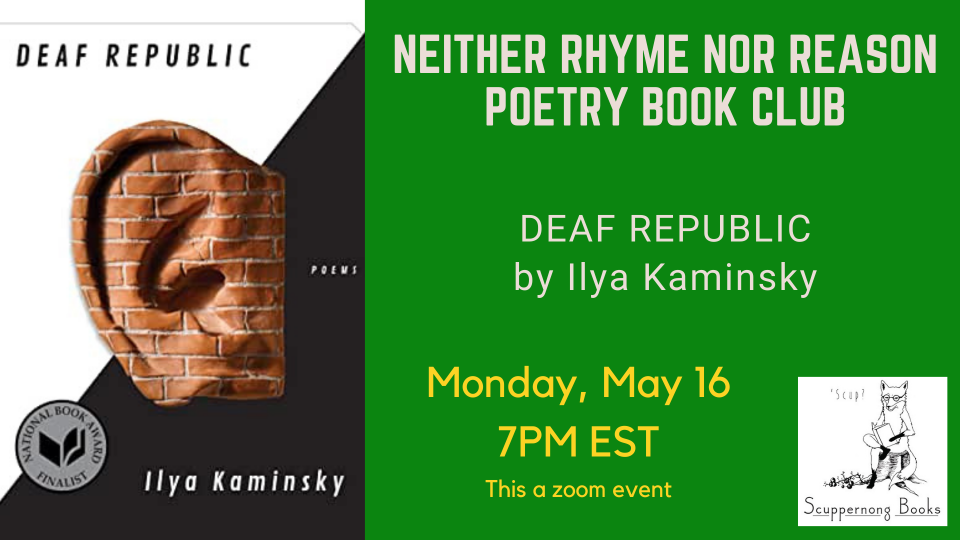 SCROLL DOWN FOR ZOOM REGISTRATION

Deaf Republic opens in an occupied country in a time of political unrest. When soldiers breaking up a protest kill a deaf boy, Petya, the gunshot becomes the last thing the citizens hear―they all have gone deaf, and their dissent becomes coordinated by sign language. The story follows the private lives of townspeople encircled by public violence: a newly married couple, Alfonso and Sonya, expecting a child; the brash Momma Galya, instigating the insurgency from her puppet theater; and Galya’s girls, heroically teaching signing by day and by night luring soldiers one by one to their deaths behind the curtain. At once a love story, an elegy, and an urgent plea, Ilya Kaminsky’s long-awaited Deaf Republic confronts our time’s vicious atrocities and our collective silence in the face of them.

“These poems bestow the power of sacred drama on a secular martyrology. . . . Kaminsky is wonderfully attentive to . . . repeating patterns of details, contributing to the impression that his book is a through-composed whole, rather than simply a sequence of individual poems. . . . By situating these poems in a country at war, Kaminsky forces the reader to consider both the ways in which we define our social belonging and the loyalties according to which we operate. . . . A visit to this republic will not leave the reader unchanged.”―The New York Times Book Review

“Evident throughout [Deaf Republic] is a profound imagination, matched only by the poet’s ability to create a republic of conscience that is ultimately ours, too, and utterly his own―a map of what it means to live ‘in a peaceful country.’”―Kevin Young, The New Yorker

“Described as a ‘parable in poems,’ Kaminsky’s soulful new collection opens on an act of horrific violence before meditating on silence and deafness in times of political unrest. The language is exquisite; the ethical questions Kaminsky poses are provocative.”―Entertainment Weekly

Ilya Kaminsky was born in the former Soviet Union. He is the author of a poetry collection, Dancing in Odessa, and coeditor of The Ecco Anthology of International Poetry. He was a 2014 finalist for the Neustadt International Prize for Literature.

Register in advance for this meeting:
https://us02web.zoom.us/meeting/register/tZMpdu2grj4tHNMILzM26aRL0F1pobHN3XOP

This feature require that you enable JavaScript in your browser.
END_OF_DOCUMENT_TOKEN_TO_BE_REPLACED

This feature require that you enable JavaScript in your browser.
END_OF_DOCUMENT_TOKEN_TO_BE_REPLACED

This feature require that you enable JavaScript in your browser.
END_OF_DOCUMENT_TOKEN_TO_BE_REPLACED