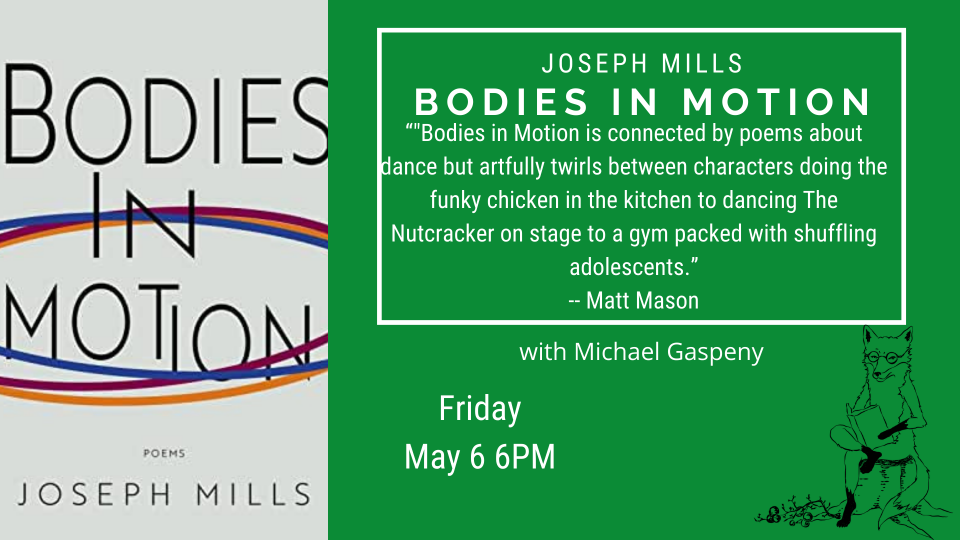 The poems in Bodies in Motion, the seventh collection of poems by Joseph Mills, offers a look at our relationship to dance, from childhood through adulthood, "To consider life as a dance is to hope / that there is a choreographer who has / some sort of vision, and an audience / who appreciates the effort." According to Nebraska State Poet Laureate Matt Mason, "Bodies in Motion is connected by poems about dance but artfully twirls between characters doing the funky chicken in the kitchen to dancing The Nutcracker on stage to a gym packed with shuffling adolescents. It steps back and forth in time with the movements of black holes in the universe, George Washington, Charles Dickens, wedding receptions, parents and their families, dance classes, Hollywood musicals, and more. Regardless of how many left feet you may have, you'll enjoy the show."

Joseph Mills is on the faculty of the University of North Carolina School of the Arts where he holds an endowed chair, the Susan Burress Wall Distinguished Professorship in the Humanities. He has published seven collections of poetry, including This Miraculous Turning, which was awarded the North Carolina Roanoke-Chowan Award for Poetry for its exploration of race and family. He made it through the first part of the pandemic by having Friday night dance parties with his family in their garage.

As a poet, short story writer, and reporter, Michael Gaspeny has published widely. For nearly four decades, he taught English and Journalism, mainly at Bennett College and High Point University, where he received the distinguished teaching award. While gaining an M.F.A. in creative writing at the University of Arkansas, he worked as a sportswriter covering the Razorbacks and as a general assignments reporter. His features on Bill Clinton's first campaign for national office have been frequently quoted in biographies of the former president. Gaspeny holds an M.A. from the University of Richmond and an undergraduate degree from Randolph-Macon College. He lives in Greensboro, North Carolina with his wife Lee Zacharias, the novelist and essayist. They have two sons.

The Tyranny of Questions (Hardcover)

This feature require that you enable JavaScript in your browser.
END_OF_DOCUMENT_TOKEN_TO_BE_REPLACED

This feature require that you enable JavaScript in your browser.
END_OF_DOCUMENT_TOKEN_TO_BE_REPLACED

This feature require that you enable JavaScript in your browser.
END_OF_DOCUMENT_TOKEN_TO_BE_REPLACED