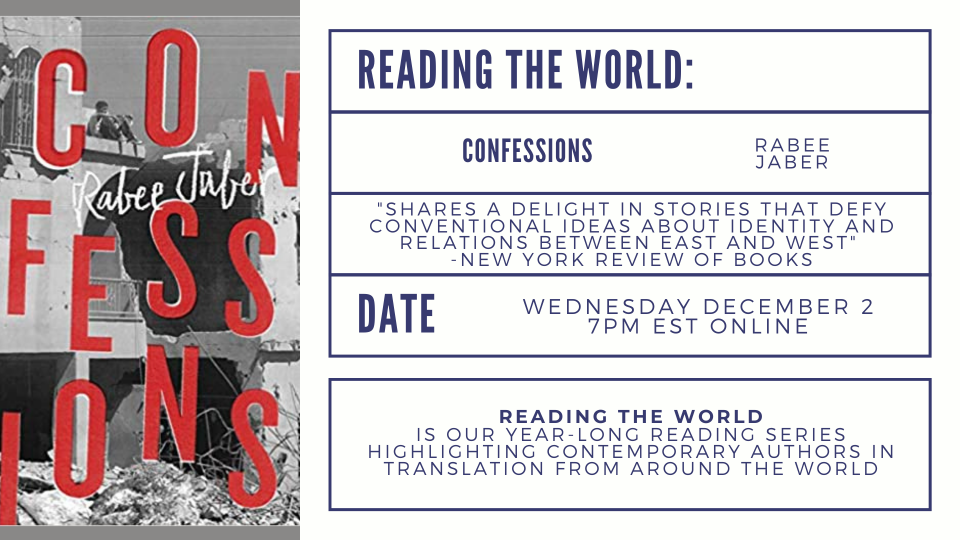 A powerful novel about trauma and forgiveness, from the winner of the International Prize for Arabic Fiction. During the violence and chaos of the Lebanese Civil War, a car pulls up to a roadblock on a narrow side street in Beirut. After a brief and confused exchange, several rounds of bullets are fired into the car, killing everyone inside except for a small boy of four or five. The boy is taken to the hospital, adopted by one of the assassins, and raised in a new family. “My father used to kidnap and kill people …” begins this haunting tale of a child who was raised by the murderer of his real family. The narrator of Confessions doesn’t shy away from the horrible truth of his murderous father—instead he confronts his troubled upbringing and seeks to understand the distortions and complexities of his memories, his war-torn country, and the quiet war that rages inside of him. Finalist for the PEN Translation Prize and PEN Center USA Translation Award.

“Jaber shares a delight in stories that defy conventional ideas about identity and the relations between East and West.”
- The New York Review of Books

“Jaber is interested in what it means to live in and with fear, not for one season but for a whole generation, two generations, three. He’s interested in the bones of Beirut, a city that has had to rebuild itself repeatedly after being razed in war in 140 B.C., then devastated by the earthquake of 551, then again during the civil war, a city whose name derives from the Canaanite be’erot ― “wells” ― the water table that still sustains it. He’s interested in what lies beneath, what nourishes us without our knowing.”
- Parul Sehgal, The New York Times Book Review

“[An] unflinching thriller about trauma and forgiveness, set in the chaos of the Lebanese Civil War.”
- Jeva Lange, The Week

The author of eighteen novels, the Lebanese writer Rabee Jaber was born in Beirut in 1972. He is the editor of Afaaq, the weekly cultural supplement of Al-Hayat, the daily pan-Arab newspaper.

Register in advance for this meeting:
https://us02web.zoom.us/meeting/register/tZMscu6tpj0vGNWA8J3b1tf_e6RX4SS8jUpc

Our storefront is currently open to limited walk-in traffic and browsing.

This feature require that you enable JavaScript in your browser.
END_OF_DOCUMENT_TOKEN_TO_BE_REPLACED

This feature require that you enable JavaScript in your browser.
END_OF_DOCUMENT_TOKEN_TO_BE_REPLACED

This feature require that you enable JavaScript in your browser.
END_OF_DOCUMENT_TOKEN_TO_BE_REPLACED