Reading the World: Eyes of the Rigel

THIS IS AN ONLINE EVENT.

SCROLL DOWN FOR MORE INFORMATION. 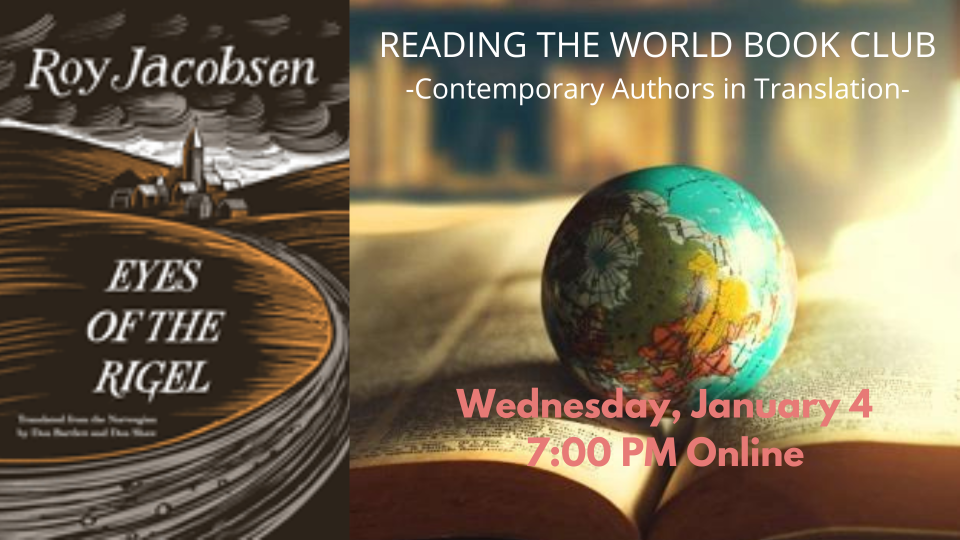 The long war is over, and Ingrid Barroy leaves the island that bears her name to search for the father of her child. Alexander, the Russian captive who survived the sinking of prisoner ship the Rigel and found himself in Ingrid's arms, made an attempt to cross the mountains to Sweden. Ingrid will follow in his footsteps, carrying her babe in arms, the child's dark eyes the only proof that she ever knew him. Along the way, Ingrid's will encounter collaborators, partisans, refugees, deserters, slaves and sinners, in a country that still bears the scars of defeat and occupation. And before her journey's end she will be forced to ask herself how well she knows the man she is risking everything to find.

"Even by his high standards, his magnificent new novel The Unseen is Jacobsen's finest to date, as blunt as it is subtle and is easily among the best books I have ever read" Eileen Battersby, Irish Times

"A beautifully crafted novel . . . Quite simply a brilliant piece of work . . . Rendered beautifully into English by Don Bartlett and Don Shaw, The Unseen is a towering achievement that would be a deserved Booker International winner" Charlie Connelly, New European.

"A profound interrogation of freedom and fate, as well as a fascinating portrait of a vanished time, written in prose as clear and washed clean as the world after a storm" Justine Jordan, Guardian

Born in Oslo to a family that came from northern Norway, Roy Jacobsen has twice been nominated for the Nordic Council's Literary Award. He is the author of more than fifteen novels and is a member of the Norwegian Academy for Language and Literature. In 2009 he was shortlisted for the Dublin Impac Award for his novel The Burnt-Out Town of Miracles. Another novel, Child Wonder, won the Norwegian Booksellers' Prize and was a Barnes and Noble Discover Great New Writers Selection. The Unseen, the first of a series of novels about Ingrid and her family, was a phenomenal bestseller in Norway and was shortlisted for the 2017 Man Booker International Prize and the 2018 International Dublin Literary Award, selected as a 2020 Indie Next pick in North America, and named a New York Times New and Noteworthy book. White Shadow, the second Barrøy novel, was published in North America by Biblioasis in 2021.

Eyes of the Rigel (Paperback)

This feature require that you enable JavaScript in your browser.
END_OF_DOCUMENT_TOKEN_TO_BE_REPLACED

This feature require that you enable JavaScript in your browser.
END_OF_DOCUMENT_TOKEN_TO_BE_REPLACED

This feature require that you enable JavaScript in your browser.
END_OF_DOCUMENT_TOKEN_TO_BE_REPLACED