(Scroll Down for Sign-In Information) 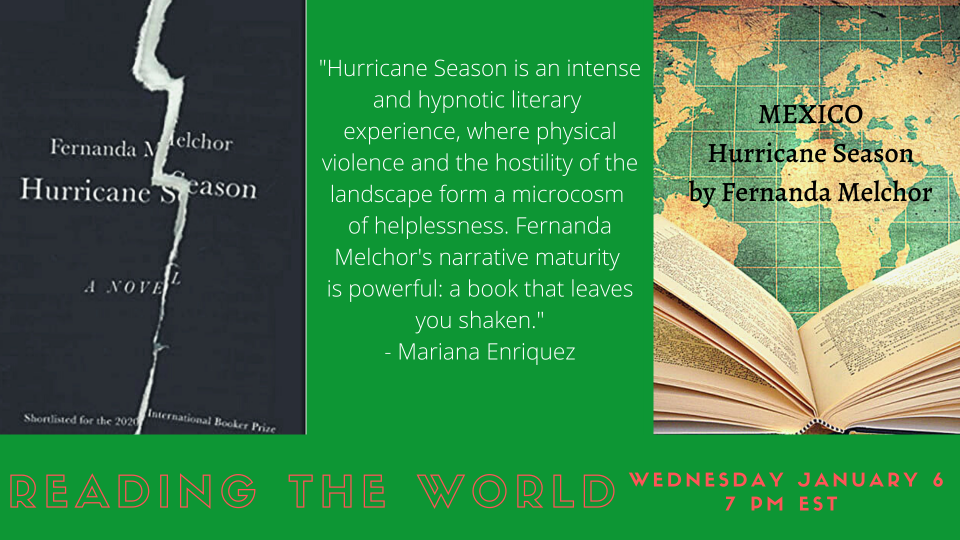 The Witch is dead. And the discovery of her corpse—by a group of children playing near the irrigation canals—propels the whole village into an investigation of how and why this murder occurred. Rumors and suspicions spread. As the novel unfolds in a dazzling linguistic torrent, with each unreliable narrator lingering on new details, new acts of depravity or brutality, Melchor extracts some tiny shred of humanity from these characters that most would write off as utterly irredeemable, forming a lasting portrait of a damned Mexican village.

Like Roberto Bolano’s 2666 or Faulkner’s greatest novels, Hurricane Season takes place in a world filled with mythology and violence—real violence, the kind that seeps into the soil, poisoning everything around: it’s a world that becomes more terrifying and more terrifyingly real the deeper you explore it.

"A brutal portrait of small-town claustrophobia, in which machismo is a prison and corruption isn’t just institutional but domestic, with families broken by incest and violence. Melchor’s long, snaking sentences make the book almost literally unputdownable, shifting our grasp of key events by continually creeping up on them from new angles. A formidable debut."
— Anthony Cummins

A dazzling novel and the English-language debut of one of Mexico’s most exciting new voices.
— Marta Bausells

Stomach-churning, molar-grinding, nightmare-inducing, and extraordinarily clear-eyed account of the ordinary horrors men inflict upon women. Melchor refuses to look away, refuses to indulge in fantasy or levity—even in the moments when the novel is laugh-out-loud funny. And lest the far-off reader think the horror is contained to the lives of others, Melchor repeatedly threads the reminders of the long reach of these crimes—and their causes—throughout the narrative.
— Lucas Iberico Lozada

Fernanda Melchor, born in Veracruz, Mexico, in 1982, is widely recognized as one of the most exciting new voices of Mexican literature.

Register in advance for this meeting:
https://us02web.zoom.us/meeting/register/tZwtdOutqzwuGtMFbkT6GZjmCpf2TpYJuBdu

This feature require that you enable JavaScript in your browser.
END_OF_DOCUMENT_TOKEN_TO_BE_REPLACED

This feature require that you enable JavaScript in your browser.
END_OF_DOCUMENT_TOKEN_TO_BE_REPLACED

This feature require that you enable JavaScript in your browser.
END_OF_DOCUMENT_TOKEN_TO_BE_REPLACED