Reading the World: The Meursault Investigation

(Scroll Down for Log-In Information) 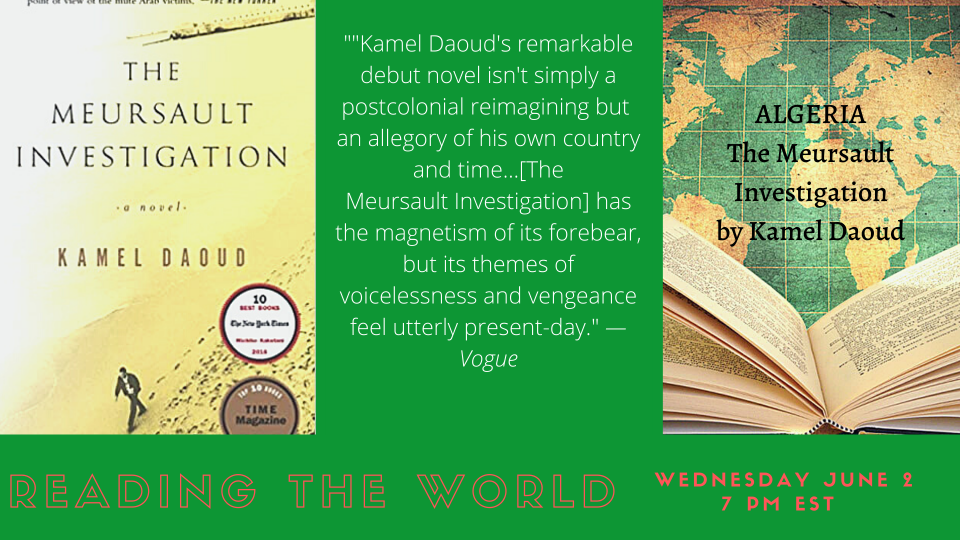 He was the brother of “the Arab” killed by the infamous Meursault, the antihero of Camus’s classic novel. Seventy years after that event, Harun, who has lived since childhood in the shadow of his sibling’s memory, refuses to let him remain anonymous: he gives his brother a story and a name—Musa—and describes the events that led to Musa’s casual murder on a dazzlingly sunny beach. In a bar in Oran, night after night, he ruminates on his solitude, on his broken heart, on his anger with men desperate for a god, and on his disarray when faced with a country that has so disappointed him. A stranger among his own people, he wants to be granted, finally, the right to die.

The Stranger is of course central to Daoud’s story, in which he both endorses and criticizes one of the most famous novels in the world. A worthy complement to its great predecessor, The Meursault Investigation is not only a profound meditation on Arab identity and the disastrous effects of colonialism in Algeria, but also a stunning work of literature in its own right, told in a unique and affecting voice.

"Provocative...What begins as a reproach to The Stranger for marginalizing 'the second most important character in the book' becomes a lament for Algeria's long battle for independence, first from French colonists and subsequently from authoritarian Islamism." —NPR

"[A] rich and inventive new novel...so convincing and so satisfying that we no longer think of the original story as the truth, but rather come to question it...[a] letter of love rebellion and despair for Algeria." —The New York Times Book Review

“Nothing…prepared me for [Daoud’s] first novel, The Meursault Investigation, a thrilling retelling of Albert Camus’s 1942 classic, The Stranger, from the perspective of the brother of the Arab killed by Meursault, Camus’s antihero. The novel...not only breathes new life into The Stranger; it also offers a bracing critique of postcolonial Algeria... The premise is ingenious: that The Stranger, about the murder of an unnamed Arab on an Algiers beach, was a true story…Meursault is less a critique of The Stranger than its postcolonial sequel.” —The New York Times Magazine

Register in advance for this meeting:
https://us02web.zoom.us/meeting/register/tZcvcu2gqzIsHNTgpl3Gv2sdrrODvZf6oydx

This feature require that you enable JavaScript in your browser.
END_OF_DOCUMENT_TOKEN_TO_BE_REPLACED

This feature require that you enable JavaScript in your browser.
END_OF_DOCUMENT_TOKEN_TO_BE_REPLACED

This feature require that you enable JavaScript in your browser.
END_OF_DOCUMENT_TOKEN_TO_BE_REPLACED