(Scroll down for Sign-In Information) 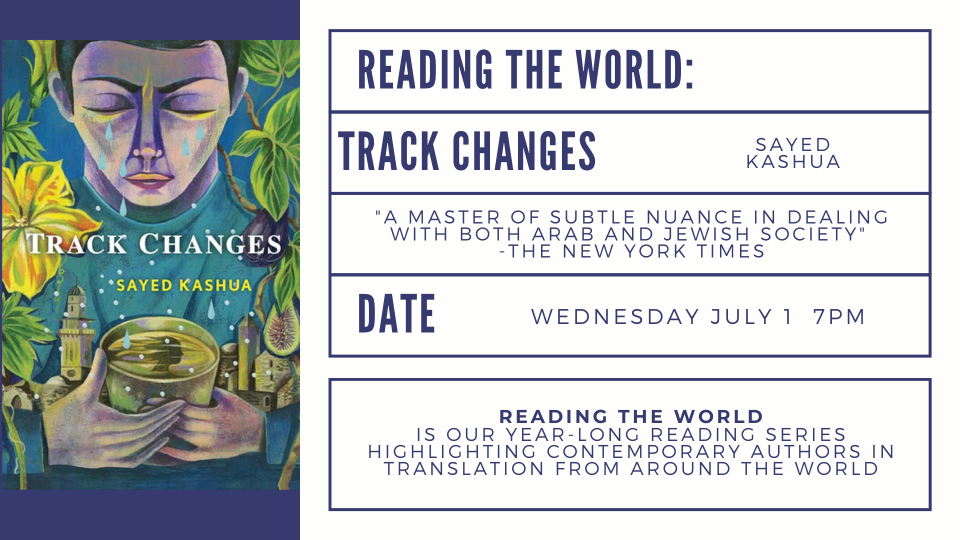 Hailed as “an unusually gifted storyteller with exceptional insight” (Jewish Tribune), Bernstein award-winning writer Sayed Kashua presents his masterful fourth novel Track Changes which follows an Arab-Israeli man as he reckons with the weight of his past, his memories, and his cultural identity.

Having emigrated to America years before, a nameless memoirist now residing in Illinois receives word that his estranged father, whom he has not spoken to in fourteen years, is dying. Leaving his wife and their three children, he returns to Jerusalem and to his hometown of Tira in Palestine to be by his family’s side.  But few are happy to see him back and, geographically and emotionally displaced, he feels more alienated from his life than ever.

Sitting by his father’s hospital bed, the memoirist begins to remember long-buried traumas, the root causes of his fallout with his family, the catalyst for his marriage and its recent dissolution, and his strained relationships with his children—all of which is strangely linked to a short story he published years ago about a young girl named Palestine. As he plunges deeper into his memory and recounts the history of his land and his love, the lines between truth and lies, fact and fiction become increasingly blurred.

Track Changes is a stunningly original, poignant, and captivating exploration of alienation, love, country, and memory by one of the most important writers at work today.

Our storefront is currently open by appointment and for socially-distanced browsing Monday-Saturday, 10:00-5:00.

This feature require that you enable JavaScript in your browser.
END_OF_DOCUMENT_TOKEN_TO_BE_REPLACED

This feature require that you enable JavaScript in your browser.
END_OF_DOCUMENT_TOKEN_TO_BE_REPLACED

This feature require that you enable JavaScript in your browser.
END_OF_DOCUMENT_TOKEN_TO_BE_REPLACED