Reading the World: Winter in Sokcho by Elisa Shua Dusapin 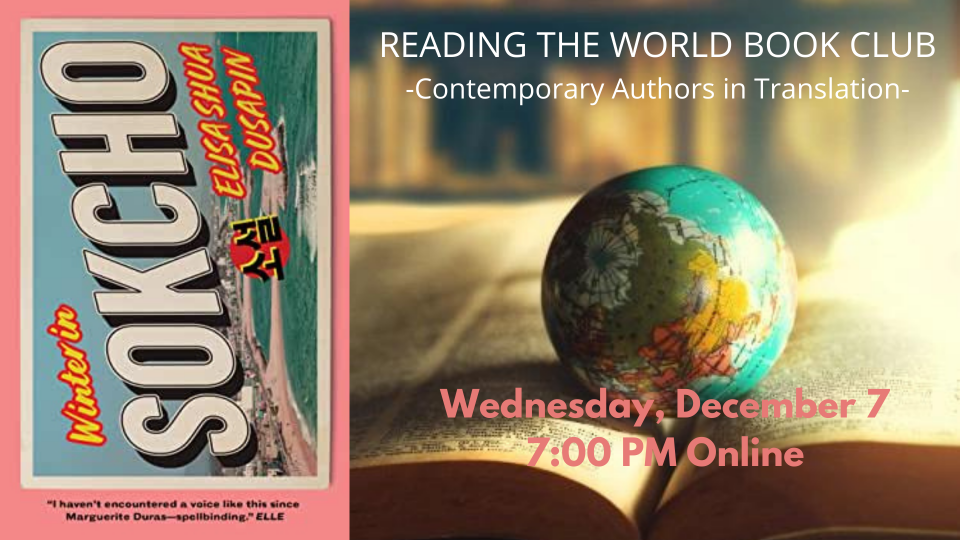 It’s winter in Sokcho, a tourist town on the border between South and North Korea. The cold slows everything down. Bodies are red and raw, the fish turn venomous, beyond the beach guns point out from the North’s watchtowers. A young French Korean woman works as a receptionist in a tired guesthouse. One evening, an unexpected guest arrives: a French cartoonist determined to find inspiration in this desolate landscape.

The two form an uneasy relationship. When she agrees to accompany him on trips to discover an "authentic" Korea, they visit snowy mountaintops and dramatic waterfalls, and cross into North Korea. But he takes no interest in the Sokcho she knows—the gaudy neon lights, the scars of war, the fish market where her mother works. As she’s pulled into his vision and taken in by his drawings, she strikes upon a way to finally be seen.
An exquisitely-crafted debut, which won the Prix Robert Walser, Winter in Sokcho is a novel about shared identities and divided selves, vision and blindness, intimacy and alienation. Elisa Shua Dusapin’s voice is distinctive and unmistakable.

“In Sokcho, everyone is in a holding pattern. The country waits for the war with the North to reignite. The town waits for warm weather and the tourist season. Kerrand waits for just the right spark of inspiration. And the narrator waits for she knows not what: perfection, happiness, freedom . . . or maybe just simple acknowledgement. Winter in Sokcho is a spare novel about existence in the between spaces of identity and passion.”—Foreword Reviews

“Dusapin's beguiling work resembles a vibrant graphic novel, sans pictures. . . . This irresistible and spare novel sketches with exquisite depth a season of searching for both a French Korean woman and a French visitor.”—Dave Wheeler, Shelf Awareness

Elisa Shua Dusapin was born in France in 1992 and raised in Paris, Seoul, and Switzerland. Winter in Sokcho is her first novel. Published in 2016 to wide acclaim, it was awarded the Prix Robert Walser and the Prix Régine Desforges and has been translated into six languages.

Register in advance for this meeting:
https://us02web.zoom.us/meeting/register/tZclcuuhpzstGNQ2vKUJ9TtZbX1mUiUra2nH

This feature require that you enable JavaScript in your browser.
END_OF_DOCUMENT_TOKEN_TO_BE_REPLACED

This feature require that you enable JavaScript in your browser.
END_OF_DOCUMENT_TOKEN_TO_BE_REPLACED

This feature require that you enable JavaScript in your browser.
END_OF_DOCUMENT_TOKEN_TO_BE_REPLACED