Scroll down for login information. 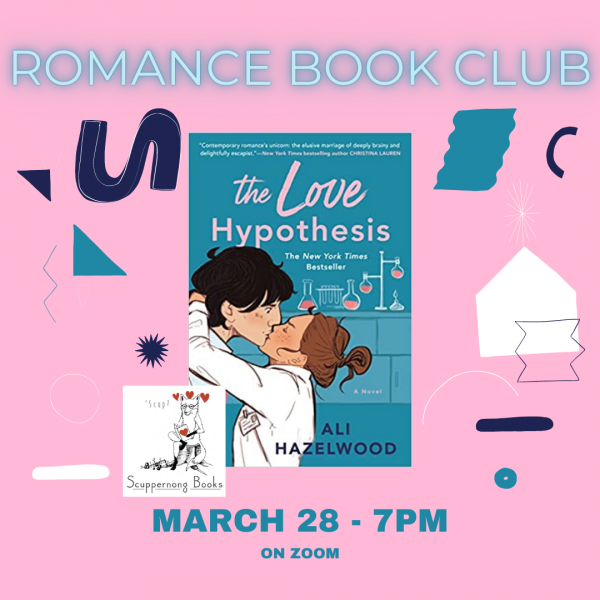 Our Romance Book Club is a monthly book club focused on contemporary, historical, and LGBTQ+ adult romances. Romance is a genre that gets a bad rep, and we want to help change that. There's so much fun writing happening in Romance today, and we think everyone deserves to see themselves in a steamy romcom novel.

When a fake relationship between scientists meets the irresistible force of attraction, it throws one woman's carefully calculated theories on love into chaos. As a third-year Ph.D. candidate, Olive Smith doesn't believe in lasting romantic relationships--but her best friend does, and that's what got her into this situation. Convincing Anh that Olive is dating and well on her way to a happily ever after was always going to take more than hand-wavy Jedi mind tricks: Scientists require proof. So, like any self-respecting biologist, Olive panics and kisses the first man she sees. That man is none other than Adam Carlsen, a young hotshot professor--and well-known ass. Which is why Olive is positively floored when Stanford's reigning lab tyrant agrees to keep her charade a secret and be her fake boyfriend. But when a big science conference goes haywire, putting Olive's career on the Bunsen burner, Adam surprises her again with his unyielding support and even more unyielding...six-pack abs. Suddenly their little experiment feels dangerously close to combustion. And Olive discovers that the only thing more complicated than a hypothesis on love is putting her own heart under the microscope.

"A literary breakthrough... The Love Hypothesis is a self-assured debut, and we hypothesize it's just the first bit of greatness we'll see from an author who somehow has the audacity to be both an academic powerhouse and divinely talented novelist."-- Entertainment Weekly

" Contemporary romance's unicorn: the elusive marriage of deeply brainy and delightfully escapist... The Love Hypothesis has wild commercial appeal but the quieter secret is that there is a specific audience, made up of all of the Olives in the world, who have deeply, ardently waited for this exact book."--Christina Lauren, New York Times bestselling author

Hilarious and heartwarming, The Love Hypothesis is romantic comedy at its best...a perfect amalgamation of sex and science, sure to appeal to readers of Christina Lauren or Abby Jimenez.--Shelf Awareness

With whip-smart and endearing characters, snappy prose, and a quirky take on a favorite trope, Hazelwood convincingly navigates the fraught shoals of academia...This smart, sexy contemporary should delight a wide swath of romance lovers.-- Publishers Weekly

Ali Hazelwood is the New York Times bestselling author of The Love Hypothesis, as well as the writer of peer-reviewed articles about brain science, in which no one makes out and the ever after is not always happy. Originally from Italy, she lived in Germany and Japan before moving to the U.S. to pursue a Ph.D. in neuroscience. She recently became a professor, which absolutely terrifies her. When Ali is not at work, she can be found running, eating cake pops, or watching sci-fi movies with her two feline overlords (and her slightly-less-feline husband).

Register in advance for this meeting: https://us02web.zoom.us/meeting/register/tZEqdu6rrDMpHdWQTjpH9wsGZrJejKvZGygF

This feature require that you enable JavaScript in your browser.
END_OF_DOCUMENT_TOKEN_TO_BE_REPLACED

This feature require that you enable JavaScript in your browser.
END_OF_DOCUMENT_TOKEN_TO_BE_REPLACED

This feature require that you enable JavaScript in your browser.
END_OF_DOCUMENT_TOKEN_TO_BE_REPLACED