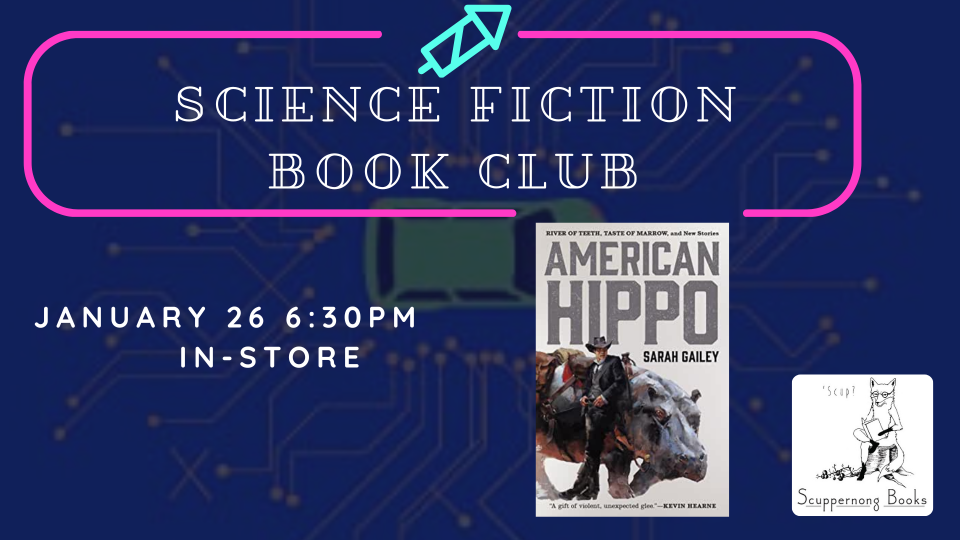 In 2017 Sarah Gailey made her debut with River of Teeth and Taste of Marrow, two action-packed novellas that introduced readers to an alternate America in which hippos rule the colossal swamp that was once the Mississippi River. Now readers have the chance to own both novellas in American Hippo, a single, beautiful volume.

Years ago, in an America that never was, the United States government introduced herds of hippos to the marshlands of Louisiana to be bred and slaughtered as an alternative meat source. This plan failed to take into account some key facts about hippos: they are savage, they are fast, and their jaws can snap a man in two.

By the 1890s, the vast bayou that was once America's greatest waterway belongs to feral hippos, and Winslow Houndstooth has been contracted to take it back. To do so, he will gather a crew of the damnedest cons, outlaws, and assassins to ever ride a hippo. American Hippo is the story of their fortunes, their failures, and his revenge.

"This hippopotamus epic is just as preposterously fun as you could possibly have hoped ― but it's also a brave, clever alternate history. River of Teeth packs one hell of a gold-plated bite." ―Charlie Jane Anders, author of All the Birds in the Sky

Hugo Award-winning and bestselling author Sarah Gailey is the author of the novels The Echo Wife and Magic for Liars. Their nonfiction has been published by Mashable and The Boston Globe, and they won a Hugo Award for Best Fan Writer. Their fiction credits also include Vice and The Atlantic. Their debut novella, River of Teeth, was a 2018 finalist for both the Hugo and Nebula Awards.

This feature require that you enable JavaScript in your browser.
END_OF_DOCUMENT_TOKEN_TO_BE_REPLACED

This feature require that you enable JavaScript in your browser.
END_OF_DOCUMENT_TOKEN_TO_BE_REPLACED

This feature require that you enable JavaScript in your browser.
END_OF_DOCUMENT_TOKEN_TO_BE_REPLACED