Scott Blackburn, It Dies With You 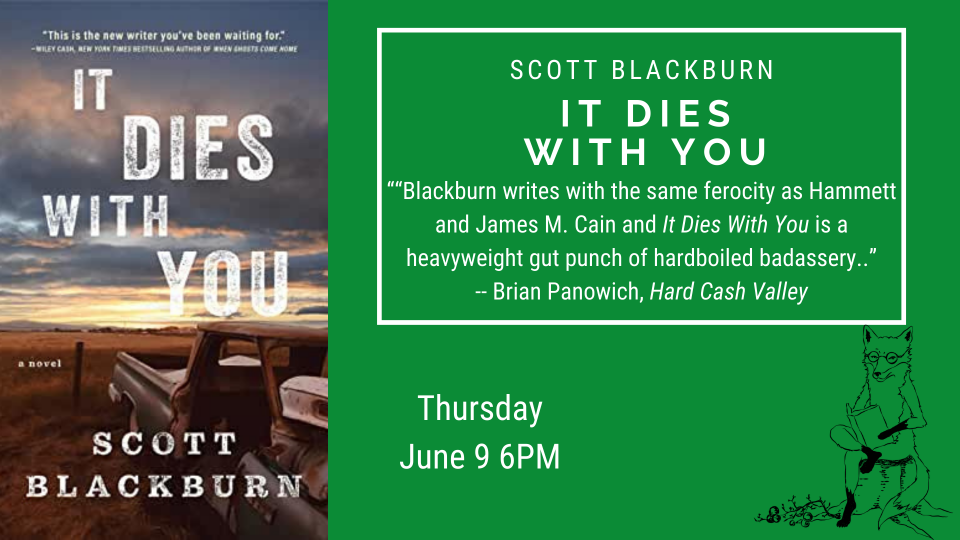 For nearly a decade, twenty-nine-year-old Hudson Miller has made his living in the boxing ring, but a post-fight brawl threatens to derail his career. Desperate for money, Hudson takes a gig as a bouncer at a dive bar. That’s when life delivers him another hook to the jaw: his estranged father, Leland, has been murdered in what appears to be a robbery-gone-bad at his salvage yard, Miller’s Pull-a-Part.

Soon after his father’s funeral, Hudson learns he’s inherited the salvage yard, and he returns to his Bible-belt hometown of Flint Creek, North Carolina, to run the business. But the business is far more than junk cars and scrap metal. It was the site of an illegal gun-running ring. And the secrets don’t end there; a grisly discovery is made at the yard that thrusts Hudson into the fight of his life.

Reeling for answers, Hudson joins forces with his father’s former employee, 71-year-old, beer-guzzling Vietnam vet Charlie Shoaf, and a feisty teenage girl, Lucy Reyes, who’s fiercely seeking justice for her own family tragedy. With a murderer on the loose and no answers from the local cops, the trio of outcasts launch an investigation. The shocking truth they uncover will shake Flint Creek to its very core.

“This is a great novel about bad decisions and second chances. Scott Blackburn has a burner of a book on his hands. He's a crime writer whose name you need to remember, and if you read It Dies with You I can guarantee you won't forget it. Fans of Michael Farris Smith, David Joy, Daniel Woodrell, and Chris Offutt, this is the new writer you've been waiting for.”
—Wiley Cash, NY Times bestselling author of A Land More Kind than Home and When Ghosts Come Home

“Blackburn writes with the same ferocity as Hammett and James M. Cain and It Dies With You is a heavyweight gut punch of hardboiled badassery. This book will leave you with bloody knuckles.”
—Brian Panowich, LA Times Book Prize Finalist, Georgia Author of the Year, and award-winning writer of Bull Mountain, Like Lions, and Hard Cash Valley.

“It Dies With You is a satisfying gut-punch of a story. Gritty and surprising, the small-town Southern mystery is populated with big characters that make this novel truly special. I was rooting for Hudson Miller, the disgraced former prizefighter turned dive bar bouncer, from page one, and I still want to buy Charlie Shoaf a beer or six. Lucy Reyes is an absolute teenage badass. I’d happily spend more time in this world. I can’t wait to read whatever Scott Blackburn writes next.”
—Tiffany Quay Tyson, award-winning author of The Past is Never

“Desperate people, in a hardworn landscape, with the smoke of emotional fires filling the Southern sky, that's what you'll get when you settle in with It Dies With You. Scott Blackburn pushes his characters to the extreme, while offering them grace and humility, the careful touch of a careful writer not afraid to go for the knockout.”
—Michael Farris Smith, author of Nick and Blackwood

Scott Blackburn is an English instructor and a 2017 graduate of the Mountainview MFA program. He lives in High Point, North Carolina with his wife and two children. When he is not writing and teaching, Scott enjoys training in combat sports such as boxing, Muay Thai, and Ju-jitsu, in which he holds a black belt.

It Dies with You: A Novel (Hardcover)

This feature require that you enable JavaScript in your browser.
END_OF_DOCUMENT_TOKEN_TO_BE_REPLACED

This feature require that you enable JavaScript in your browser.
END_OF_DOCUMENT_TOKEN_TO_BE_REPLACED

This feature require that you enable JavaScript in your browser.
END_OF_DOCUMENT_TOKEN_TO_BE_REPLACED