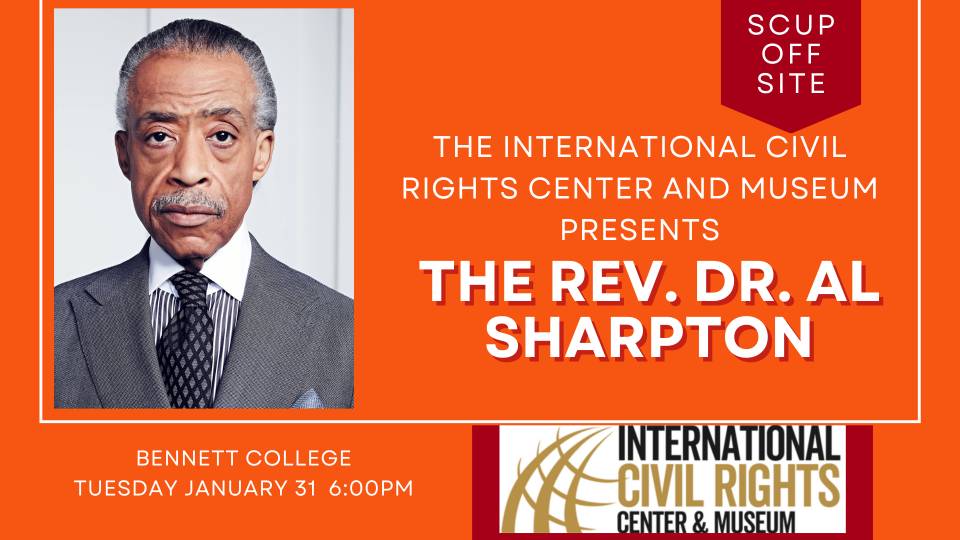 Listen to legendary civic leaders. Get their autographed works.

Join the International Civil Rights Center & Museum, in conjunction with N.C. A&T State University, UNC Greensboro, Bennett College, Guilford College, and Greensboro College in February 2023 as we host exceptional civil rights leaders during the Museum's inaugural "Civil Rights Series" highlighting some of America's most consequential stories from the people who were there.

“This is the time. We won’t stop until we change the whole system of justice.”—Rev. Al Sharpton

While the world may know the major names of the Civil Rights movement, there are countless lesser-known heroes fighting the good fight to advance equal justice for all, heeding the call when no one else was listening, often risking their lives and livelihoods in the process.

Righteous Troublemakers shines a light on everyday people called to do extraordinary things—like Pauli Murray, whose early work informed Thurgood Marshall’s legal argument for Brown v. Board of Education, Claudette Colvin, who refused to give up her seat on a segregated bus months before Rosa Parks did the same, and Gwen Carr, whose private pain in losing her son Eric Garner stoked her public activism against police brutality. Sharpton also illuminates the lives of more widely known individuals, revealing overlooked details, historical connections, and a perspective informed by years of working on the front line of the social justice movement, to provide a behind-the-scenes look at the wheels of justice and the individuals who have helped advance its cause.

Rev. Al Sharpton is the host of MSNBC’s “PoliticsNation” and the founder and President of the National Action Network (NAN), one of the leading civil rights organization in the world. With over 40 years of experience as a community leader, politician, minister and advocate, the Rev. Al Sharpton is one of America’s most-renowned civil rights leaders. Sharpton also hosts the nationally syndicated radio show, “Keepin’ It Real”, which broadcasts in 40 markets, five days a week.

Get your tickets here.

This feature require that you enable JavaScript in your browser.
END_OF_DOCUMENT_TOKEN_TO_BE_REPLACED

This feature require that you enable JavaScript in your browser.
END_OF_DOCUMENT_TOKEN_TO_BE_REPLACED

This feature require that you enable JavaScript in your browser.
END_OF_DOCUMENT_TOKEN_TO_BE_REPLACED