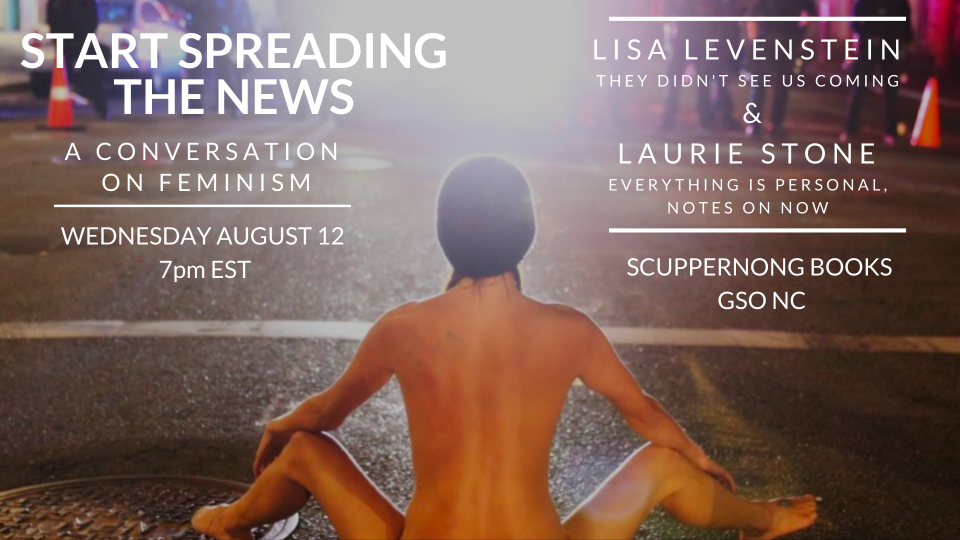 Join us for a spirited conversation on the Feminist Movement in America.

They Didn't See Us Coming: The Hidden History of Feminism in the Nineties

From the declaration of the “Year of the Woman” to the televising of Anita Hill’s testimony, from Bitch magazine to SisterSong’s demands for reproductive justice: the 90s saw the birth of some of the most lasting aspects of contemporary feminism. Historian Lisa Levenstein tracks this time of intense and international coalition building, one that centered on the growing influence of lesbians, women of color, and activists from the global South. Their work laid the foundation for the feminist energy seen in today’s movements, including the 2017 Women’s March and #MeToo campaigns. A revisionist history of the origins of contemporary feminism, They Didn’t See Us Coming shows how women on the margins built a movement at the dawn of the Digital Age.
Lisa Levenstein is the Director of the Women's, Gender, and Sexuality Studies Program and an Associate Professor of History at UNC Greensboro. Her first book, A Movement Without Marches, won the Kenneth Jackson Book Award. She lives in Chapel Hill, NC.
Everything Is Personal, Notes On Now
by Laurie Stone

Everything is Personal, Notes on Now is a collage of hybrid narratives that begin with the stunning events of November 2016—a time that challenges Stone to feel good when everything is bad. Freely jumping between social commentary, criticism, memoir, and fiction, the pieces are constructed like dreams and films: juxtaposing images, racing along with dolly shots, moving in for close-ups, and pulling back for a sweeping sense of time. Throughout are chunks from her Facebook posts that read like tender and funny postcards written to everyone from a time that is unimaginable, even as it’s being lived.

Laurie Stone writes fiction, hybrid literature, and criticism. A longtime writer for The Village Voice, she is the author of four books, most recently My Life as an Animal, Stories. Her work has appeared in n+1, Evergreen Review, and Fence among other publications.

Register in advance for this meeting:
https://us02web.zoom.us/meeting/register/tZEudOytqzosHNwL5rjCVD3R4qKQx5rb4915

They Didn't See Us Coming: The Hidden History of Feminism in the Nineties (Hardcover)

Our storefront is currently open by appointment only for socially-distanced browsing Monday-Saturday, 10:00-5:00.

This feature require that you enable JavaScript in your browser.
END_OF_DOCUMENT_TOKEN_TO_BE_REPLACED

This feature require that you enable JavaScript in your browser.
END_OF_DOCUMENT_TOKEN_TO_BE_REPLACED

This feature require that you enable JavaScript in your browser.
END_OF_DOCUMENT_TOKEN_TO_BE_REPLACED