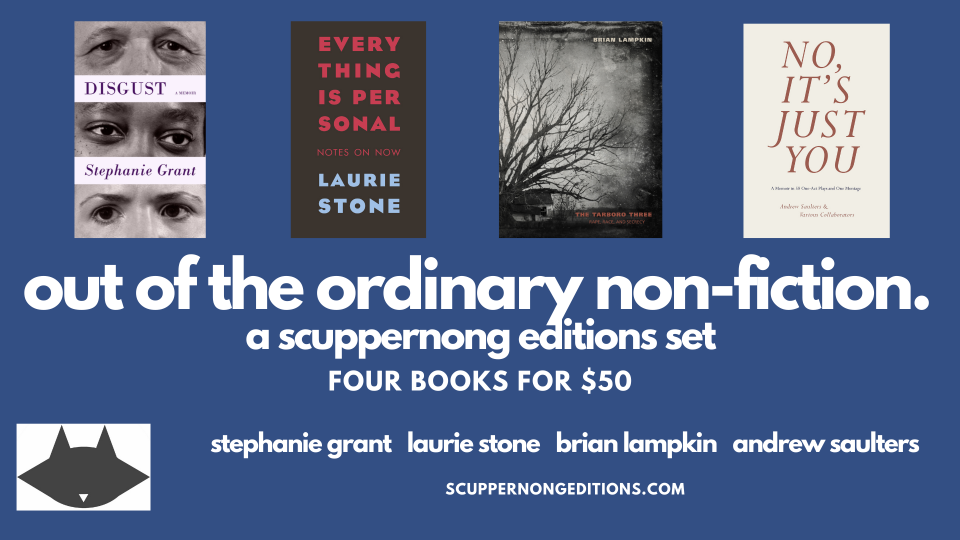 DISGUST: A MEMOIR by Stephanie Grant

"When, in my twenties, I came out to my parents as a lesbian, I became an object of their disgust. As a result, I worked to eliminate disgust from my repertoire of emotions."

In this hybrid memoir, novelist Stephanie Grant works to make sense of three generations of female self-disgust in her family while considering how it challenges both the American ideal of equality and our real-life experiences of intimacy. Disgust: A Memoir is funny, tender, and rigorous in its exploration of how the most difficult emotion functions both in our private lives and our collective imaginations.

"Starkly beautiful and infinitely true. Disgust is a deep and brilliant gaze into all it truly means to feel, to be human, to love."

-Jacqueline Woodson, Red to the Bone

EVERYTHING IS PERSONAL: NOTES ON NOW by Laurie Stone

Everything is Personal, Notes on Now is a collage of hybrid narratives that begin with the stunning events of November 2016 and challenge Stone to feel good when everything is bad. Freely jumping between social commentary, criticism, memoir, and fiction, the pieces are constructed the way dreams and films are: juxtaposing images, racing along with dolly shots, moving in for close-ups, and pulling back for a sweeping sense of time. Woven throughout are chunks from Stone's Facebook posts that read like tender and funny postcards written to everyone from a time that is unimaginable, even as it's being lived.

"Stone is engaging, sharp, funny throughout these pages but no matter how far she ranges, she holds onto the recognition that daily life in the US is being lived under a dark cloud.

She makes the stakes very clear. Her Notes on Now are completely illuminating."

--Chris Kraus, author of I Love Dick, from the Introduction

THE TARBORO THREE: RAPE, RACE, AND SECRECY by Brian Lampkin

On an August evening in the summer of 1973 in Tarboro, North Carolina a young woman walking alone was offered a ride by three young men. All of their lives were changed dramatically as the ensuing events became national news and for a very brief period Tarboro became a center of a conversation on the Civil Rights movement and criminal justice in America. Nearly half a century later, is a town entitled to forget its place in history if that place is uncomfortable? Are individuals entitled to privacy even as an accurate retelling of history requires exposure? The Tarboro Three: Rape, Race, and Secrecy looks at the history of racism in a small town and how it has continued to inform life into the 21st century.

"Brian Lampkin’s story of the Tarboro 3 adds an important chapter to our understanding of the history and volatility of race relations in the South. In re-visiting the final days of and traumas that beset forced school integration in a small eastern North Carolina town, Lampkin reminds readers today of how violence—in this case, the 1930 lynching of Oliver Moore–and threats of violence thread through African-American communities in ways that white Americans seem unable to fathom."

– Alex Albright, author of The Forgotten First: B-1 and the Integration of the Modern Navy.

NO, IT'S JUST YOU: A Memoir in 58 One-Act Plays and One Montage by Andrew Saulters

If a word is repeated at a regular interval, the eventual result is simple music. In these one-act plays and montage transcribed from public conversations, Andrew Saulters fumbles in the pursuit of such music. Will he find it? Could he? 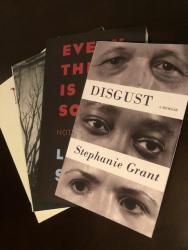 Mask required. No eating or drinking in the store.

This feature require that you enable JavaScript in your browser.
END_OF_DOCUMENT_TOKEN_TO_BE_REPLACED

This feature require that you enable JavaScript in your browser.
END_OF_DOCUMENT_TOKEN_TO_BE_REPLACED

This feature require that you enable JavaScript in your browser.
END_OF_DOCUMENT_TOKEN_TO_BE_REPLACED