For our next yearly program, Scuppernong Books will offer READING THE WORLD, an eleven month reading series of contemporary fiction authors in translation from around the world.

We'll lead an open discussion on each month's book on the first Wednesday of each month at 7pm. 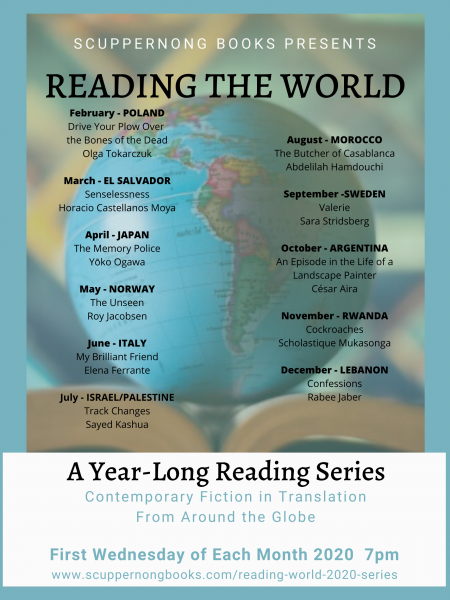 The Memory Police by Yōko Ogawa

The Unseen by Roy Jacobsen

My Brilliant Friend by Elena Ferrante

The Butcher of Casablanca by Abdelilah Hamdouchi

Drive Your Plow Over the Bones of the Dead: A Novel (Hardcover)

The Memory Police: A Novel (Hardcover)

Valerie: or, The Faculty of Dreams: A Novel (Hardcover)

An Episode in the Life of a Landscape Painter (Paperback)

Our storefront is currently open to limited walk-in traffic and by appointment for socially-distanced browsing Monday-Saturday, 10:00-5:00.

This feature require that you enable JavaScript in your browser.
END_OF_DOCUMENT_TOKEN_TO_BE_REPLACED

This feature require that you enable JavaScript in your browser.
END_OF_DOCUMENT_TOKEN_TO_BE_REPLACED

This feature require that you enable JavaScript in your browser.
END_OF_DOCUMENT_TOKEN_TO_BE_REPLACED