Save the US Postal Service 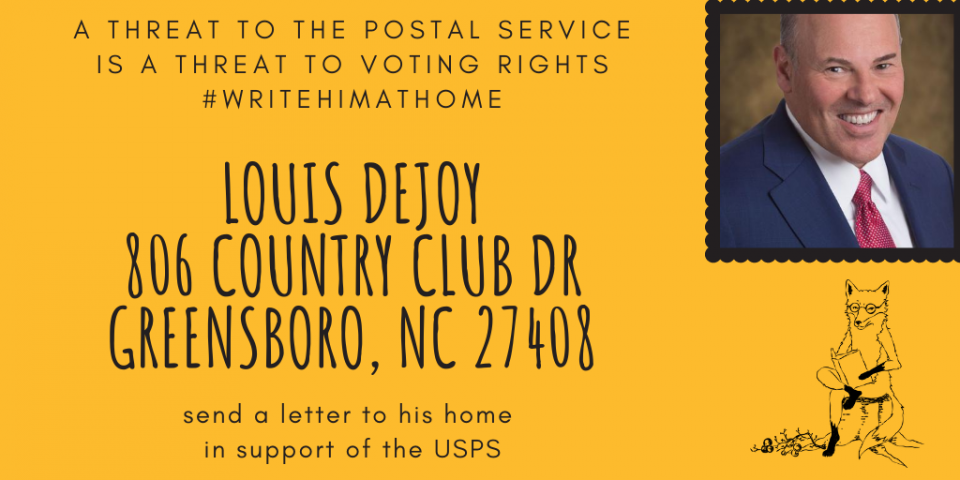 Louis DeJoy is a Greensboro resident. He was recently appointed Postmaster General of the US Postal Service.

Read further down to find out why this wasn't, perhaps, a great idea.

Hundreds of thousands of local businesses rely on Postal Service rates to conduct their business, including Scuppernong Books, and other independent bookstores and small presses.

Hundreds of thousands rely on the Postal Service to deliver their medications, paychecks, and other important documents.

In rural communities, the Post Office serves as a bank, where one can buy money orders.

The Postal Service also provides a safe and secure way to vote, for those who are homebound, immuno-compromised, or far from a polling place.

We urge you to write Louis DeJoy at his home and demand that he preserve the US Postal Service as the vital and expansive government service it is Constutionally mandated to be.

The address is above.

Or Elon College, where he is on the Board: presidentsoffice@elon.edu

If you need more information, the following comes from Indy Week in Raleigh, NC.

"Have you noticed that you're getting less and less mail, and sometimes not at all? It's not because you're being sent less mail; it's because the U.S. Postal Service is being squeezed to a pulp by the Trump administration. And no one is more responsible than Trump's new postmaster general, Greensboro businessman Louis DeJoy.

Here's an extra story from The Charlotte Observer on Aldona Wos's controversial tenure at the Department of Health and Human Services. She resigned a few days after subpoenas were served: https://www.charlotteobserver.com/opinion/op-ed/article38015070.html

Louis DeJoy is on the Elon University Board of Trustees. Here's a petition you can sign to support removing him.

Louis DeJoy is removing postal boxes in some cities.

John Oliver on the US Postal Service

This feature require that you enable JavaScript in your browser.
END_OF_DOCUMENT_TOKEN_TO_BE_REPLACED

This feature require that you enable JavaScript in your browser.
END_OF_DOCUMENT_TOKEN_TO_BE_REPLACED

This feature require that you enable JavaScript in your browser.
END_OF_DOCUMENT_TOKEN_TO_BE_REPLACED