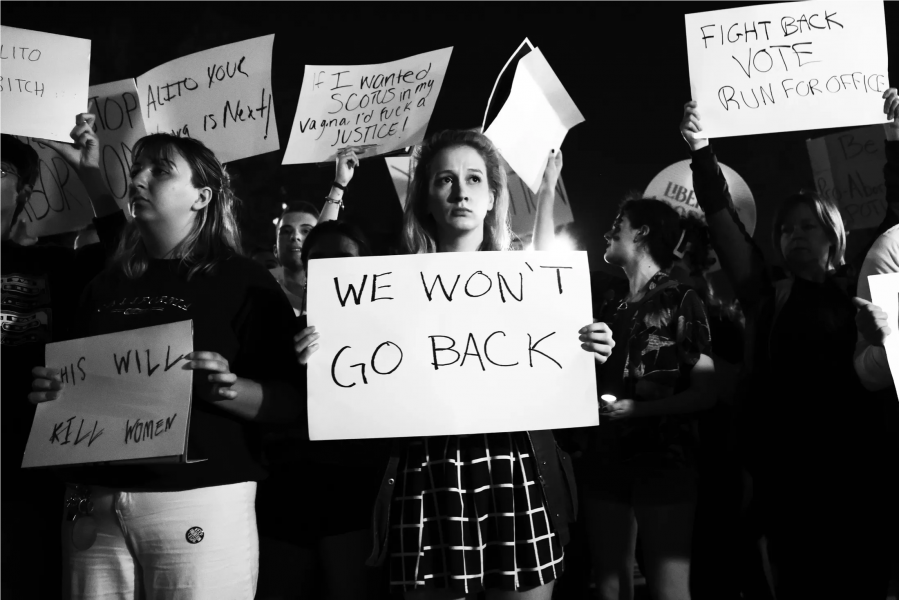 What It Was Like by Ursula K. Le Guin:
They asked me to tell you what it was like to be twenty and pregnant in 1950 and when you tell your boyfriend you’re pregnant, he tells you about a friend of his in the army whose girl told him she was pregnant, so he got all his buddies to come and say, “We all f*cked her, so who knows who the father is?” And he laughs at the good joke….
What was it like, if you were planning to go to graduate school and get a degree and earn a living so you could support yourself and do the work you loved—what it was like to be a senior at Radcliffe and pregnant and if you bore this child, this child which the law demanded you bear and would then call “unlawful,” “illegitimate,” this child whose father denied it … What was it like? […]
It’s like this: if I had dropped out of college, thrown away my education, depended on my parents … if I had done all that, which is what the anti-abortion people want me to have done, I would have borne a child for them, … the authorities, the theorists, the fundamentalists; I would have born a child for them, their child.
But I would not have born my own first child, or second child, or third child. My children.
The life of that fetus would have prevented, would have aborted, three other fetuses … the three wanted children, the three I had with my husband—whom, if I had not aborted the unwanted one, I would never have met … I would have been an “unwed mother” of a three-year-old in California, without work, with half an education, living off her parents….
But it is the children I have to come back to, my children Elisabeth, Caroline, Theodore, my joy, my pride, my loves. If I had not broken the law and aborted that life nobody wanted, they would have been aborted by a cruel, bigoted, and senseless law. They would never have been born. This thought I cannot bear.
What was it like, in the Dark Ages when abortion was a crime, for the girl whose dad couldn’t borrow cash, as my dad could? What was it like for the girl who couldn’t even tell her dad, because he would go crazy with shame and rage? Who couldn’t tell her mother? Who had to go alone to that filthy room and put herself body and soul into the hands of a professional criminal? – because that is what every doctor who did an abortion was, whether he was an extortionist or an idealist.
You know what it was like for her. You know and I know; that is why we are here. We are not going back to the Dark Ages. We are not going to let anybody in this country have that kind of power over any girl or woman. There are great powers, outside the government and in it, trying to legislate the return of darkness. We are not great powers. But we are the light. Nobody can put us out. May all of you shine very bright and steady, today and always.
Articles and Resources
No Justice Alito, Reproductive Justice is in the Constitution by Michele Goodwin
Alexandria Ocasio-Cortez Shares Information and Resources on instagram
Rebecca Traister on the Necessity of Hope
Scalawag: Southern Abortion Providers on What the Media Is Getting Wrong
What It Means to Anthologize the Literature of Abortion
The Supreme Court's Next Term Should Be Postponed by Gene Nichol
The Carolina Abortion Fund FAQ
See Book Selections below
Scuppernong's Statement on Abortion Rights
Even if you are the most oblivious male-human on earth, maybe you can take a moment to realize that the reversal of Roe v. Wade does affect you: because you have a daughter, a wife, a mother, you might even have women friends, and all of them—all of them—became less of a person last week in the sight of US law. Their bodies are not their own. They belong to some degree to the State, in a way yours perhaps never will. To celebrate, or ignore, the overturning of Roe v. Wade is to turn away from all the women you supposedly care about. It’s to allow them to appear—to become—less than you, the male citizen. If that is what you want, why on earth would you want that? If it’s not what you want, this is your fight.
-Steve
The recent Supreme Court decision on Roe v. Wade is an American regression. The loss of a fundamental right of control over one’s body sets back the legal clock, in some cases, 150 years. We grew up with a belief in the possibility of progress. We witnessed civil rights gains, a growing gender equality, LGBTQ visibility and legal advances. Our fight for justice was met with failure and disappointment and just enough victory to keep hope and the will to change as essential pieces of our psychological makeup.  This Supreme Court and its Republican accomplices threaten the very idea of progress. This decision is an attempt to begin the rewiring of the American collective understanding of what is a possible American future.

Resistance to this coming legal assault on progress starts with things like a new underground railroad that supports women and their access to healthcare. A rebuilt Jane Network that understands aspects of our governmental structures are working to the detriment of women’s health and thus women’s health must be protected by non-official means. Until healthcare is once again a private concern between a woman and her doctor, alternate means of access will rise up and our challenge will also be to ensure the safety and efficacy of these alternate means.

In some states, the simple dissemination of information about abortions is being criminalized. This is as dangerous as the abortion restrictions themselves. Knowledge is power, perhaps, but knowledge and information are directly related to health and safety. Access to information is the domain of books and independent bookstores. Here lies the intersection of book-banning, abortion-banning, and the banning of history. The control of information is authoritarian strategy, and bookstores work to undermine authoritarianism by refusing to play along. We will carry so-called banned books. We will not bury uncomfortable history. And we will supply information on abortion access and women’s health care. It’s our obligation and just a small piece of what needs to be done.
- Brian

Controlling Women: What We Must Do Now to Save Reproductive Freedom (Hardcover)

When Abortion Was a Crime: Women, Medicine, and Law in the United States, 1867-1973, with a New Preface (Paperback)

How All Politics Became Reproductive Politics: From Welfare Reform to Foreclosure to Trump (Reproductive Justice: A New Vision for the 21st Century #2) (Paperback)

Bodies on the Line: At the Front Lines of the Fight to Protect Abortion in America (Hardcover)

Handbook for a Post-Roe America (Paperback)

This feature require that you enable JavaScript in your browser.
END_OF_DOCUMENT_TOKEN_TO_BE_REPLACED

This feature require that you enable JavaScript in your browser.
END_OF_DOCUMENT_TOKEN_TO_BE_REPLACED

This feature require that you enable JavaScript in your browser.
END_OF_DOCUMENT_TOKEN_TO_BE_REPLACED